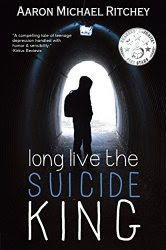 “Seventeen-year-old Jim JD Dillinger knows exactly how his miserable suburban life is going to play out. At least drugs added a little chaos to his life, but after almost losing his soul, JD knows he has to quit. Now clean, he figures he has another sixty years of plain old boring life followed by a nasty death. JD decides to pre-empt God by killing himself. However, once he decides to die, his life gets better, more interesting, and then downright strange. New friends. Possible romance. And donuts. Lots of donuts. Once the end is in sight, every minute becomes precious.”

A former secondary school teacher and recovering TV addict, Aaron Michael Ritchey lives in Colorado where he runs triathlons and helps raise his two daughters. He is the author of one previous novel, The Never Prayer.

Compared to the average teenager, Jim “JD” Dillinger has it good. If someone tweeted his complaints about life, I’d expect to see a #firstworldproblems or even #richsuburbankidissues hash tag accompanying it. However, teen angst, depression, and wondering about the point of life can happen to any teen. Suicide knows no boundaries and logic isn’t part of the equation.

My biggest concern with reading this book was that it might be too much. For anyone whose life has been touched by suicide (I’m guessing a whole lot of people) it’s a serious subject. A story that deals with the subject has to have dark moments. Long Live the Suicide King is dark at times, but this is offset by lighter, humorous moments and never felt too heavy to me. It’s subtle in making points about choosing life over death while never feeling preachy. An excellent read, not just for its young target audience, but for adults as well.

One f-bomb and a couple mild scenes that touch on sex. Much less than the typical teenager will be exposed to in an average school day.

Email ThisBlogThis!Share to TwitterShare to FacebookShare to Pinterest
Labels: 5 Star, Reprise Review, YA