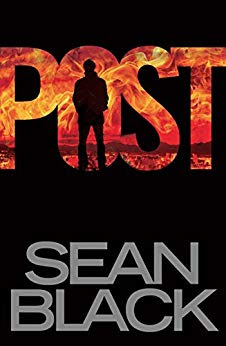 Byron Tibor is highly trained undercover special forces agent. But his most recent mission in Afghanistan catches up with him. Suffering from post traumatic stress disorder he enters a military programme to produce the guilt free soldier...

Sean Black is the author of the best selling Ryan Lock thriller series. As research he trained as a bodyguard, worked in a prison and has undergone desert training. He grew up in Scotland, but spent some of his childhood in the US. He now lives in Ireland.

I've had Sean Black on my TBR list for some time and I'm very glad to have finally got around to his work with Post. This is a thoroughly enjoyable read that has several major twists and turns that keeps the reader guessing through to the end. The premise, PTSD and a set of military enhancements to 'develop' enhanced soldiers could so easily have become something standard and dull, but the opposite is the case here. It reminded me slightly of a book I read quite a few years ago called Weapon by Robert Mason (eventually a film, I think) - but Post is far superior.

Post opens with a very stressed out man in a bank who kills himself. The police and military are all over the scene within moments, it's all very shady and the author creates a powerful tension and mystery that left me wanting to know more. Then we switch to Afghanistan and we meet Byron during his undercover op in Afghanistan. It's a major style change, and the first of several. We follow Byron as he undertakes his op and the repercussions...

Then we hit what at first seems to be a disjointed scene. Byron thinks he's in Afghanistan, but discovers he is actually outside Las Vegas. If this sounds confusing, good. I don't want to give any more of the plot away. At this point I thought Black had lost it, but pushing through discovered this was all part of the plan. Byron's past and present memories are mixed up and he sets out to make sense of it all. Again, excellently done.

Overall this is a superior thriller that raises questions in the reader's mind about humanity and ethics, the power of government and how soldiers are treated. The characters are excellent as is Black's sense of place. High tension, powerful mystery cut through with a military theme. The conclusion is satisfying and draws everything together with perhaps the potential for a sequel? I hope so.