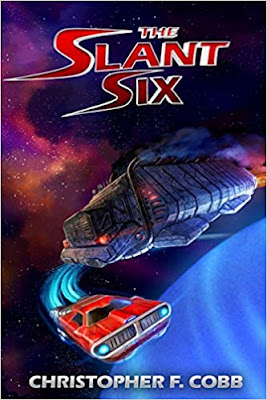 The Slant Six was a Semi-Finalist in the Florida Writer's Association Royal Palm Literary Awards, presumably in 2017.

The book blurb says “The year is 2252 and Loman Phin is in trouble. A washed-up channelship racer turned freelancer, he hits pay dirt with his latest mission: a fortune is on the line if he can transport forty-three kilograms of human skin to a remote villa on Pluto's moon, Nix. Little does he know his very life is at stake when he gets caught up in an ancient feud, chased by a space vampire, and forced into a death-race by the king of Ceres. Meanwhile, danger is always hot on his heels in the form of a massive space freighter out for Loman's blood. With just his wits, his friends, and his beat-up cruiser, the Slant Six, Loman sets out on the most dangerous adventure of his life.”

Christopher Cobb set out to be an actor. That didn’t go so well, so he returned to Florida, did a degree in Social Science and Ethnic Studies, and now works as a Marketing Specialist for the Palm Beach County Film and TV Commission. He lives in Jupiter, lucky man (work it out). He is published by Florida-based Darkwater Syndicate who say they are ‘the publishing company with a defense contractor’s name … We refuse to be mainstream. Our authors are not afraid to push boundaries and buck trends.” This is his second novel.

The Slant Six is a dashing space opera which rushes headlong from disaster to disaster. There is hardly a space opera trope which hasn’t been lovingly plundered to add to the mayhem. Cobb’s language is a sort of space opera patois which I have never come across before. Most appropriate. The plot is derivative but the story is told with such immense energy it outstrips its well-known origins. Cobb is good with dialogue and action (his actor background stands him in good stead) and he keeps the whole crazy ride just about on course.

Death is not an absolute in this book. People are more or less dead at various points. They quite often don’t stay that way. Sadly, the people one wishes could become less dead are usually the people who are dead for good. The right things happen to the right people by the end, but the ending is not a happy one (although it is complicated). Stick with it.

As people often say about a book which is very visual, this would make a good film. It begs to be Spielberged. If you enjoyed Stars Wars I – III you will enjoy this.

Where to start! Almost every qualifier in the book is a bodily function. There is a lot of ‘wham bam thank you ma’am’ sex (without the thank you). There are some proper female characters, but most of the women in the book are described as whores and bitches most of the time. If that sort of thing doesn’t bother you, read on.

Hi Judi! Thank you for the very insightful and enjoyable review! You make terrific points and have given me plenty of food for thought. The sequel to "The Slant Six" is currently being written and let's just say...it's all about girl power! Kidd and Little Man are on the rise in "The Wicked Split!" :)

You're a wonderful writer yourself!