Reprise Review: The Road to Rebirth by Dean F Wilson 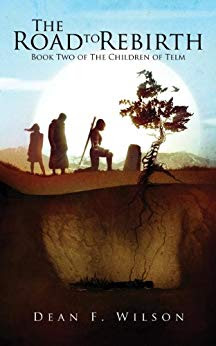 The Road to Rebirth picks up where The Call of Agon left off. Ifferon, Herr’Don, Delin and company learn what they need and want out of the next chapter of their journey when all seems almost lost beyond repair. The characters go through moments of self-discovery and are prepared to fight for what they believe in – even if that means meddling with the afterlife.

Dean F. Wilson was born in Dublin, Ireland. The Call of Agon was his first published novel, which won an award for an early draft in 2001. Wilson has since published two more. He is also a journalist working in the technology field.

The sequel isn’t usually better than the original in a series, but The Road to Rebirth is certainly an exception to that.

This is the second book in Dean F. Wilson’s series The Children of Telm. It picks up right where it left off when all the characters of the first book learned devastating news. Now, it’s time we learn how they deal with the challenges that have been put before them.

The action in The Road to Rebirth is much crisper than the original, likely because there isn’t much backstory that Wilson needs to tell to get this story moving. While there may be slightly less action than the first, there is more going on here with all the characters discovering more about themselves as they are tested to their limits.

The Road to Rebirth takes many of the characters in different directions than they plan on going, but the different journeys seem important to the quest that lies before them.

The writing is also much cleaner, cutting through any unnecessary words, but still allowing Wilson’s wonderful prose seeped with rich, lively color to allow the readers to get a full picture of the world he has created.

Wilson also shows the characters’ growth. They are all in such different places from when we meet them in the first book until the end of the second.  After going on a journey through two books with these characters, I feel invested in them and am intrigued to learn how it all plays out.

This is the second book in The Children of Telm series and does not work as a standalone.

Added for Reprise Review: The Road to Rebirth by Dean F Wilson was a nominee in the Fantasy category for B&P 2015 Readers' Choice Awards. Original review ran June 14, 2015