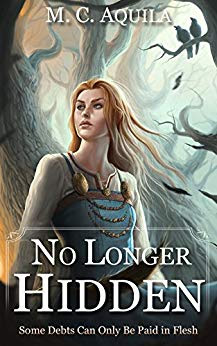 “Linnea is a Swedish princess reluctantly settled into her role as the middle child: never as influential as the eldest and never as beloved as the youngest. With her fiancé missing in action for nearly a decade, her future is uncertain. But when the Norwegian king curses her younger sister, the fate of Sweden itself is at risk. As war breaks out, Linnea goes on a quest to meet the king and strike a deal that will save the lives of her family and her people — even if it means using her own life as a bargaining chip.

But quests rarely go as planned, especially as she uncovers the secrets of Norway's royal family and the hidden purpose of the war…

This loose retelling of the classic fairy tale East of the Sun and West of the Moon takes place near the end of the Viking Age when the old, fierce gods of myth and the new, omnipotent Christian God were both considered equally true and real.”

“M. C. Aquila graduated from Winthrop University with a degree in English. She grew up in Pittsburgh, PA but currently resides in South Carolina. When she is not co-writing the Winter's Blight series, she tutors both native and ESL students in English, giving her a renewed love for the strange wonderfulness of the language.

She also enjoys drawing daily, baking recklessly, hiking in the Blue Ridge Mountains, searching for the best red wine in existence, and reading any story with a villain she loves to hate.”

Linnea is the middle child, one of three princesses of Sweden. She accepts her standing as not as important as her older sister, who will become queen. And not as loved as her youngest sister. However, it would be nice if her father didn’t rub that in her face so blatantly. He’s not a cruel king, he is just blinded by his status, or perhaps he doesn’t realize what he is doing. So, yeah, Linnea has some self-esteem issues. And now her intended, the prince of Norway, is presumed dead after disappearing on a hunting expedition several years ago.

So begins Linnea’s quest to trek alone across the country to sacrifice herself to an evil magician King of Norway to prevent a war. Her adventure is filled with new experiences. To reduce her vulnerability she hires an experienced guide, Haakon, along the trail. Linnea is naïve but not stupid. She is quite creatives and cunning. Other notables are the Witch of the Mountain, a huge wolf from the old world, and other mythological creatures that keep her on her toes.

There are a couple of huge plot twists that keep Linnea off balance, change the direction of the story, and ramps up the tension. Linnea is an easy heroine to root for because of her bravery, loyalty, and easy going personality. I found this an enthralling tale.