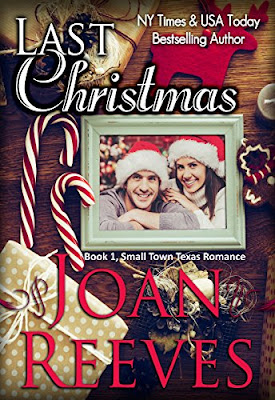 “A year ago, Annabelle fell in love at first sight with a mysterious stranger. After a week of unforgettable passion, he walked out of her life. A year of heartache, accompanied by the dirty tricks life can serve up, finds Annabelle back in her hometown, determined to forget the man who still haunts her dreams.

Who should walk into her grandmother’s Christmas party? Why the man who seduced her, lied to her, and betrayed her! He has a new name and a new identity, but his effect on her is as old as time.

Rick Lassiter wants to woo Annabelle back to him. Unfortunately, he has two big problems: he can't explain the past and the sweet-tempered, passionate woman he fell in love with has a will as strong as his and a desire to make him pay for breaking her heart.”

“Joan Reeves is a NY Times and USA Today bestselling author of Contemporary Romance. She began her career with New York traditional publishers. When the Amazon Kindle came along, she happily embraced a new career path as an independent author/publisher.

Added for Reprise Review: This review is from LOVE, CHRISTMAS 1 – Box set of Holiday stories that will put a song in your heart! Original review ran November 21, 2016. **Originally written for "BigAl’s Books and Pals" book blog. May have received a free review copy.**

Just one significant issue, which I mentioned in the body of my review. My other issue was small, a sentence with extra words.