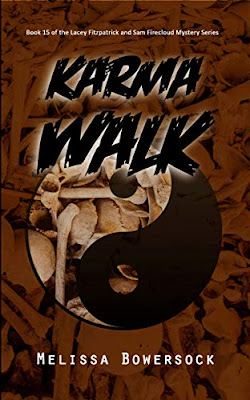 “Abe Sydlowski was a cop in Long Beach, California, and had a long, distinguished career—until he died. Now his ghost is appearing at a beach he used to patrol, and his brothers of the shield want to know why. Lacey Fitzpatrick and medium Sam Firecloud are called in but get one surprise before they even start. Daniel, Sam’s fourteen-year-old son, wants to work with them. When the trio goes to investigate, they find not one ghost, but two. Who is the young girl whose spirit haunts the beach with Abe, and what’s the connection between the two?”

I think this is my favorite book of A LACEY FITZPATRICK and SAM FIRECLOUD MYSTERY SERIES, so far. I had to add that little disclaimer because Ms. Bowersock continues to amaze me with her imagination and storylines. Karma Walk reaches further afield than any of her other books in this series. Also, Daniel, Sam’s fourteen year-old son wants to join Sam on his “walk.”  Sam thinks this case will be a slam-dunk since they already know who the ghost is and allows Daniel to come along. It’s nice to see him accepting his budding mediumistic gift. However this case has a startling twist.

One of the things I enjoy about this series is how realistic each of the characters are. Sam and Lacey have grown individually and as a family unit. I also like the way the Fireclouds include Daniel’s girlfriend, Tori, in their family weekend plans. The secondary characters are as fully formed as the regular cast members. The dialogue is believable as they struggle to come to grips with elements in the story. Lacey and her research adds an element of realism to the stories. Which makes it easy to suspend disbelief.

When the pieces of each spirit’s story start falling into place it shocks Lacey, Sam, and Bernice, Abe’s widow, who immediately becomes a believer. Emotions are intense as this story comes to conclusion. I found it hauntingly beautiful. I love this series!

Review is based on a pre-release beta copy and I cannot comment on the completed product.

You are welcome, Ms. Bowersock. Thanks for dropping in and commenting.