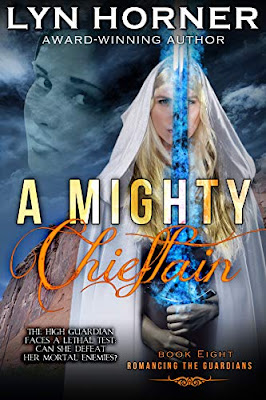 “Lara Flewellen, the High Guardian of Danu, faces a lethal test. Can she defeat the vicious Hellhounds or will they force her and the other six Guardians to hand over the prophetic scrolls they and their ancestors have safeguarded since ancient times?

Balor, the Hellhound leader, and his followers have discovered the Guardians’ sanctuary in Canyon de Chelly, heart of the Navajo Nation. Trapped along with their mates and their native protector, the Guardians must run from one hiding place in the canyon to another using their supernatural powers and raw courage to survive. Fear and suffering are their constant companions.

Tearing Lara apart, Balor holds her twin sister prisoner, threatening her life. How can she save her twin and uphold her vow to guard the sacred prophecies at the same time? It seems impossible. A desperate prayer to Danu the Great Mother may bring a miracle . . . or catastrophe.”

The Hellhounds have located the Guardians’ in Canyon de Chelly. It’s just a matter of time before they find their sanctuary. They do their best to defend Leon Tseda’s home when Balor arrives with his Hellhound minions. Despite their guardian powers the small tribe end up on a run for their lives to protect their individual prophetic Druid scrolls, which have been guarded by their ancestors for centuries. They run farther into the Navajo land where their survival skills are tested.

This is an exciting adventure where prayers to The Great Mother Goddess, Danu, may be their only hope. As they head deeper into the canyon complex named Canyon del Muerto, Canyon of the Dead, Lara Spenser is faced with coming to terms with some hard truths and some unexpected twists in the story line.

I have to admit this book left me with a few questions. However, it is a unique and entertaining read with an interesting ending. I also love the striking book cover.

The Mighty Chieftain is book 8 and the culmination in Lyn Horner’s Romancing the Guardians Series. I do believe it is necessary to read the other books in this series.