Review: The Other Side of Elsewhere by Brett McKay 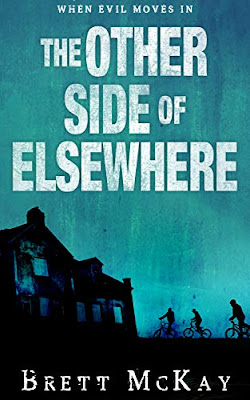 “Ret McCoy was always the new kid, but after three years in the small town of Riverton, he thinks his family may have finally settled. He and his friends have the perfect summer planned before they start seventh grade, and his new job at the local mortuary promises enough pocket money for all the sodas they can drink.

A dare from an older boy quickly ruins their plans. Everyone knows to stay away from the Crooked House, but after Ret and his friends take on the dare to spend the night in the abandoned house, they become caught up in the house’s dark history.

Later, an outsider buys the house. When people start to disappear, Ret is determined to solve the mystery before it swallows the entire town. His obsession with the Crooked House and its strange new owner threatens to put him and his friends in danger more terrifying than anything they could have imagined.”

For me The Other Side of Elsewhere had two levels. The first, higher level, is one that potential readers with comparable tastes are likely going to experience much the same. The second level is one that very few will connect with in the same way as I did. It’s at a much more detailed and personal level. Whether it is positive, negative, or even something that registers will vary by reader. I’ll try to explain.

At the high level this is a paranormal suspense or thriller novel. The protagonist is a twelve year-old boy and I don’t think it would be a stretch to call it a coming of age story as well. If when the story takes place is ever spelled out, I missed it, but there are subtle clues that would lead me to believe anytime in the period from the 70s to the early 80s would be a reasonable assumption. This could and I think would appeal to a wide range of ages, from young adult to a not-at-all-young adult who might have been coming of age when the story takes place. While the story isn’t happening in current times I think regardless of when you were 12, whether a couple years ago or several decades, you’ll be able to relate to Ret, the protagonist in the story. (Girls, might not see themselves in Ret, but they’ll surely see their brother or some other boy they knew.)

For me, much of this story, both in the behavior of Ret and his friends as well as the environment and culture of their hometown, were just like where I lived at twelve. In fact, Ret’s hometown is a real town in Utah, about 50 miles from where I grew up in the same period the story took place. I found myself nodding my head at something specific thinking that the author had it just right. But a few times I’d stop nodding and start wondering how the average reader would react. Would they understand the specific? Not likely. But maybe they’d get a sense for what was being said without understanding. Some of these things were terminology specific to the religion that dominates Utah like Primary (religious instruction for younger children) or Relief Society (a women’s organization within the Mormon church). Others weren’t religious, but still Utah specific, like a reference to the Dee Burger Clown (the “mascot” for a long-defunct fast food chain). I think these things were infrequent enough to not be a serious issue for those who don’t understand the reference. For those who do, it makes the story that much more credible and authentic.