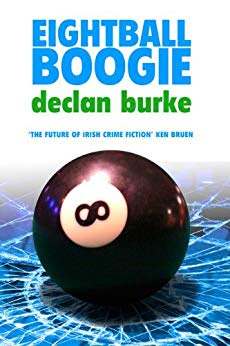 “Freelance hack Harry Rigby likes a smoke, the easy life and Robert Ryan playing the bad guy in late night black-and-whites. Sweet. But when the wife of a prominent politician is murdered in her best nightdress, Rigby finds himself caught in a crossfire between rogue paramilitaries, an internal Garda inquiry and the heaviest blizzard of coke ever to hit Ireland’s northwest. If all that wasn’t bad enough, his relationship with Denise is on the rocks. And then there’s Gonzo, Rigby’s brother, back on the streets and meaner than a jilted shark …”
This book was originally published by Lilliput Press and may still be available through them in a paper version.

Declan Burke lives with his family in Wicklow, Ireland. In addition to this novel, he has written three others, two of them available for your Kindle. He also edited Down Those Green Streets: Irish Crime Writing in the 21st Century. For more, visit Burke’s blog.

Imagine an Elmore Leonard book written by an Irishman, and you’ll have a good idea of what to expect from Eightball Boogie. Harry Rigby is a hanging-by-his-fingertips private eye who bills himself as a “research consultant.” His relationships are complicated and not always what they seem (to us or to him), and in this case he’s in over his head from the start.

Although I loved the story, what I found impressed me the most was Burke’s way with words. For example, this line:

Down in the Old Quarter, two times out of three you flip a double-headed coin, it comes down on its edge. Last time, it doesn’t come down at all.

Or Burke’s description of his favorite pub:

The benches were upholstered in worn red velvet. The carpet was pocked with tiny scorch marks. The low ceiling was tuberculosis brown.

Or when Harry said he’d “have spotted Helen Conway with one eye tied behind my back.” I’d be reading on cruise control, taking the story in, and then hit a line that had me do a double take because it was different, but also evocative, in a way you don’t often see. Eightball Boogie gets all the stars and thumbs pointing at the ceiling that I have to give.

Some adult language and situations. The author is from Ireland where Eightball Boogie takes place, and uses spelling conventions appropriate for Ireland. There is also a lot of Irish slang.

A small number of what I perceived as proofing or copy editing misses, almost all instances of missing small words. I’ve become convinced that these situations aren’t seen as errors in many English speaking countries. For example, “I was tempted to touch the ugly welts on her throat but I got out the car, locked it, crunched through the snow to the hospital,” seems like it is missing an “of” to me. If not, where did he get the car out from? Maybe his pocket?

Great review. The first line of your appraisal paints a vivid picture. :)

Thanks, Vicki. Great to hear from you. Happy New Year.