Review: Sleeping with the Blackbirds by Alex Pearl 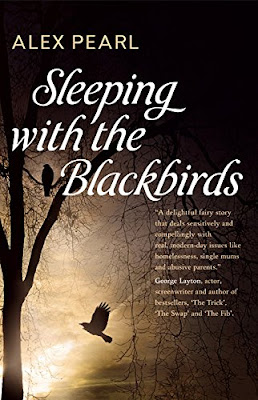 “Eleven-year-old schoolboy, Roy Nuttersley has been dealt a pretty raw deal. While hideous parents show him precious little in the way of love and affection, school bullies make his life a misery. So Roy takes comfort in looking after the birds in his garden, and in return the birds hatch a series of ambitious schemes to protect their new friend. As with the best-laid plans, however, these get blown completely off course - and as a result the lives of both Roy and his arch tormentor, Harry Hodges are turned upside down - but in a surprisingly good way.”

Author:
“Alex Pearl is an advertising copywriter living in NW London with his wife and two kids.

Sleeping with the Blackbirds - a black, comic urban fantasy, was initially written for his children in 2011 and published by PenPress, and subsequently republished by CreateSpace.

In 2014 his short story, Scared to Death - the fictionalised account of the first British serviceman to be executed for cowardice during the First World War, was published by Mardibooks along with 22 other short stories in an anthology entitled The Clock Struck War.

Alex is currently writing a very dark thriller set in London following the terrorist attack in 2005. He hopes to have this completed and on the shelves by 2019.

Alex's claim to fame is that he is quite possibly the only person on this planet to have been accidentally locked in a record shop on Christmas Eve.”

Eleven year-old Roy Nuttersley is living in a toxic environment of emotional abuse and often neglectful parents. To say nothing of the bullies at school. He finds solace in the back yard under their huge oak tree. Roy has built several brightly painted bird feeders to hang in the trees for the birds he considers friends. The large black birds understand and feel the sadness emanating from Roy. So, they devise plans to protect Roy. When one of their schemes goes awry, the result turns the lives of both Roy and his arch tormentor, Harry Hodges, upside down.

The characters are well developed with precision for the readers to properly understand each and every one. This includes the birds who are instrumental in several portions of the tale. The string of events are cunning and well thought out. There were twists to the story I never expected. The adventure becomes quite emotional at times and handles several heavy topics with humanity and grace.

This is a book that would be enjoyed by middle grade and young adults. I think they will easily identify with the characters and many situations. There are many morals to be learned in this story. The twists at the end of the book are brilliant and make the story worth sharing.