Review: Windmaster by Helen B. Henderson 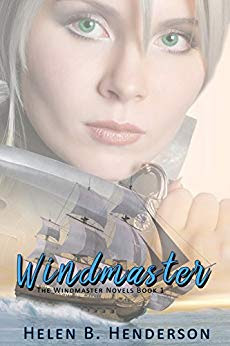 “Despite his insolent attitude, Ellspeth, captain of the Sea Falcon, is attracted to the dark-haired worker she hires to help unload the vessel's cargo.

When the supposed dockhand reveals he is Lord Dal, the last member of the Council of Wizards, and her passenger, Ellspeth breaks a cardinal rule—fraternizing with the paying customers. Bringing Dal back from near-death releases Ellspeth's latent powers and threatens her captaincy. For to have magic she must give up the sea.

In accordance with an ancient prophecy, Dal allows Ellspeth to be handfasted to him without her knowledge or consent. However, the prophecy doesn't state whether she will return his love. A likelihood threatened as the deception is unveiled and they are hunted by fanatical clerics bent on ridding the world of magic and those who wield it.

Trapped within the Oracle's Temple and marked for sacrifice, Ellspeth is forced to choose between survival, saving the future of magic...or love.”

Author:
Helen B. Henderson writes about herself, “Although I wrote fiction for myself as long as I can remember, and been a professional writer for many years, pursuing publication for my fiction is a more recent endeavor… My writing crosses genres and types, from fiction to historical documentaries. I'm especially proud of the two romantic fantasy series, the Dragshi Chronicles and the Windmaster novels. Originally conceived as short stories, the characters came to life for me and my readers. I hope they will for you also.”

Ellspeth has sea water in her veins. She has always dreamed of captaining her own ship, which she has accomplished, and has the loyalty and respect of her crew. It’s long been known that magic and deep water don’t mix, and that fact is proven when Lord Dal, the last member of the Council of Wizards, and two healer mage’s are passengers on the Sea Falcon when a magical storm engulfs the ship. Lord Dal is gravely injured using his powers to protect the vessel, and it’s all the healing mage’s can do to keep him alive. Little does Ellspeth realize her latent ability for mage power has awakened, and she is able to pull Dal back from the brink of death with her touch and speaking to him.

This is an exciting tale that will keep you on the edge of your seat till the last page. There is an evil mage, with his conspiring evil clerics, human sacrifices, and swashbuckling sword fights. As well as serious soul searching, contemplation, emotional turmoil, and a budding romance. All woven into a quest for hidden wizarding artifacts to fulfill an ancient prophecy to save the wizarding world.

The characters are well thought out and fully developed. I found it easy to become fully immersed in their world of challenges. The scenery puts the reader on the deck of a ship looking out over calm or raging sea, experiencing the adventures of crossing the craggy cliffs, beautiful meadows, or forested lands. The plot twists and turns in clever ways. The dialogue is natural and believable. I can’t think of one thing I didn’t enjoy about Windmaster. I would highly recommend to readers who enjoy adventures by land and sea, swashbuckling quests, and magic.

Windmaster is book one in the WINDMASTER NOVELS. Young Adult appropriate.