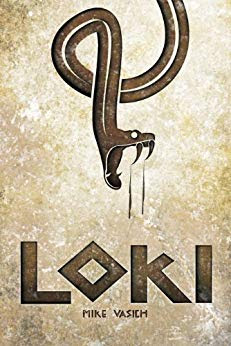 Loki. The Trickster. What would the overarching story of the Aesir and the countdown to Ragnarok be, told from his viewpoint?

Mike Vasich teaches English to gifted and talented students. He is the author of a separate anthology of stories about Loki, as well as other books. He has a wicked sense of humor and welcomes feedback from readers.

To see Mr. Vasich’s other books you can visit his Amazon Author page.

I am somewhat familiar with the traditional stories from Norse mythology, so this book had immediate appeal for me. It starts out with a very brief recap of the traditional story of Loki and his relationship with the other Norse gods (the Aesir). It then moves quickly into a retelling of the stories familiar to many of the Twilight of the Gods, moving towards Ragnarok and the destruction of the world – only told from Loki’s viewpoint. As a literary device, it’s an excellent way to make an old story new again. Loki never quite becomes a sympathetic character, but the reader does realize that there are two sides to every story. The author obviously knows his Norse mythology frontwards and backwards. I have a friend who is Norwegian, living in Norway, who read this along with me, and she agreed that it was true to the stories she heard growing up, with allowances made for the different point of view.

The author has an amazing power of characterization. In one battle scene (possibly one of the best battle scenes I have ever read), he was able to convey to perfection the personification of thunder and lightning in Thor and his hammer. I knew that, but reading that scene, it was brought home to me like never before. Thor was thunder and Mjollnar was lightning, and the concepts were inseparable. It was one of those “Ahhh” moments when you fully realize and understand something you’ve known all along.

I loved this book, but I could not help stopping to think how very different the mindset and motivations of the characters are from what we (meaning Americans, most likely the intended audience) are used to in our literature. I found Odin to be one of the most frightening figures I have ever met in a book – and that includes characters such as Lucifer/Satan, Sauron, Voldemort, and others of that ilk. Interestingly, my Norwegian friend did not feel the same way at all – she says that Odin is the All-father; he’s above and beyond mere human emotion and rationalization. Yet, that was exactly what I felt was so chilling about him – the total apathy, the absolute unwillingness to lift a finger to change the course of events that were fated.

All in all, an excellent book, and highly recommended. It’s safe to say that this is probably the best book I’ve read so far this year. I would say that it would appeal primarily to readers who have some familiarity with traditional Norse mythology, since they would be able to appreciate some of the nuances more, but that certainly isn’t a perquisite.

None. Formatting was perfect.