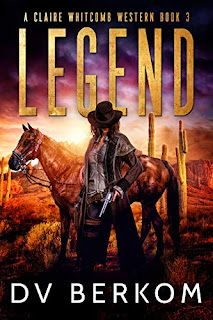 “In the aftermath of the gunfight at the O.K. Corral, Claire accepts a job transporting a convicted murderer to prison. But Harry, the bounty hunter who captured the outlaw, is none too pleased to be sharing the reward—and trusting a woman to have his back.

Will Claire and Harry settle their differences and work together to deliver their captive to justice? Or will the murderer kill again to escape the noose?”

“DV Berkom is the USA Today bestselling author of action-packed, riveting adventure and crime thrillers. Known for creating resilient, kick-ass female characters and page-turning plots, her love of the genre stems from a lifelong addiction to reading spy novels, action/adventure stories, and thrillers.”

This third volume appears to be the final installment of this series, taking the tale of Claire Whitcomb from the murder of her family in the first to what I’ll describe as her new normal by the end of this book, with plenty of excitement in between. Most of the story in this book involves assisting Harry, a bounty hunter, in transporting a prisoner to prison. Harry isn’t very pleased to have Claire foisted on him as an assistant and, at least at first, he doesn’t realize that she isn’t a man, nor does the prisoner. This was a fun read, both wondering how things were going to be complicated if Harry or the prisoner realized Claire wasn’t a guy, and anticipating complications were going to come getting the prisoner to prison (otherwise where was the conflict going to be?) and wondering how that was going to shake out. What, if anything, happens on both these fronts is something you’ll have to find out on your own. Maybe I got surprised. Regardless, I enjoyed the read which kept me entertained and on the edge of my seat throughout.

Book 3 of the series. While I think the book could be read as a standalone, knowing all that led to this point would help get even more from the book.

My review is based on an advance copy and I’m unable to gauge the final product in this area.

Thanks, BigAl! Glad you enjoyed my foray into Westerns :-)