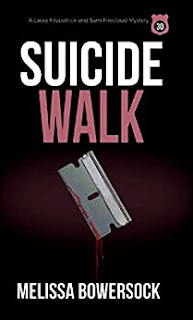 “Raising teenagers is tough. Medium Sam Firecloud and his partner, Lacey Fitzpatrick, have that brought home to them in spades when Sam’s sixteen-year-old son, Daniel, calls a sudden family meeting to make an unexpected, and unwelcome, announcement. Not only are Sam and Lacey struggling to deal with the development, they’re doing it in different ways, adding to the tension. At the same time, they are hired to investigate the death of a fifteen-year-old girl who chose to tragically end what was a privileged but tragic life. When Sam’s usual methods for dealing with a tethered soul go stunningly wrong, he and Lacey are left to wonder if they can ultimately help either of the two teens—living and dead—to find peace.”

“Melissa Bowersock is an eclectic, award-winning author who writes in a variety of fiction and non-fiction genres: biography, contemporary, western, action, romance, fantasy, paranormal and spiritual. She has been both traditionally and independently published and is a regular contributor to the superblog Indies Unlimited. She has a tattoo on the inside of her left wrist that says IMAGINE. In her next life, she plans to be an astronaut. She lives in a small community in southern Utah with her husband and an Airedale terrier. She also writes under the pen name Amber Flame.”

Teen angst times two in Suicide Walk. Daniel, Sam’s sixteen-year-old son, calls a family meeting to make an unconventional and unwelcome announcement which no one is happy about. As Sam and Lacey struggle to deal with this development, tension rises as they deal with this situation in different ways. At the same time Sam and Lacey are hired to release the spirit of a fifteen-year-old girl who chose to end what was a privileged but tragic life a year ago. They have to figure out why she is tethered to this earthly plane. When Sam tries to release her spirit, she reacts violently. Oops! Then the father fires them and plans on billing them for the damage incurred. Double oops!

Even though they have been fired from this job Lacey can’t let it go. She knows they have missed something vital from Tessa’s tragic life. Suicide Walk is a captivating and emotional story that will keep you turning the pages. The characters are well rounded and their dialogues are realistic. The plot moves at a nice pace, Ms. Bowersock doesn’t mince words to pad her word count. I also love the way Sam’s kids are worked into the story and we get to share their growing pains as well. It’s like having a magical window into the Firecloud’s daily life. I love that part of the series. Okay, back to the story at hand, you may want to have a box of Kleenex close by for the emotional climax.

I was a beta reader for this novella so I can’t speak about the final edition.