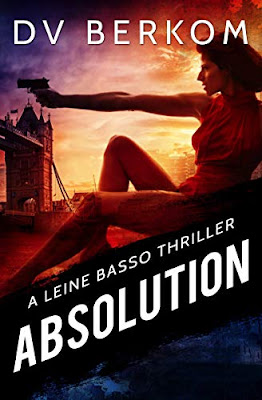 “There’s only one sure way to stop a terrorist…

Former assassin Leine Basso has severed ties with everyone she loves to keep them safe while she hunts for the ruthless terrorist, Salome. There are rumblings that the French-born assassin is planning another attack and Leine’s determined to stop her before it’s too late.

Can Leine thwart her plans, or will Salome’s own twisted vengeance mean the end for Leine and everyone she loves?

From London to Edinburgh to the City of Angels, Salome’s making a comeback—and that comeback includes killing Leine.”

“DV Berkom is the USA Today bestselling author of two action-packed thriller series featuring strong female leads: Kate Jones and Leine Basso. Her love of creating resilient, kick-ass women characters stems from a lifelong addiction to reading spy novels, mysteries, and thrillers, and longing to find the female equivalent within those pages. After a lifetime of moving to places people like to visit on vacation, she now lives in the Pacific Northwest with her husband and several imaginary characters who like to tell her what to do.”

In my review of Dark Return, the prior book in this series, I talked about how the protagonist, Leine Basso, is constantly doing a balancing act between good and evil. She’s helping protect good people from evildoers, but sometimes the things she does to do so would be considered evil if the situation was just a bit different. I also felt that she ended that last book out of balance, leaning a bit too much to the dark side.

This next installment is almost a continuation of that last volume, with Leine in search of the same evildoer and having to protect some of the same people from her. As in all the books in this series, things get intense. Typically, when I’m reading a thriller, especially a series like this where I’ve seen the heroine come out on top over and over, I may not know how they’re going to get there, but I anticipate they’re going to. Unlike the norm, reading Absolution I was fearful that some of the good guys weren’t going to make it, either Leine or one or more of the people she loves the most. Telling you whether my fears were justified or not would be a spoiler, so I won’t. You’ll have to find out for yourself.

Thanks for the fantastic review, BigAl. I'm glad you enjoyed it :-)