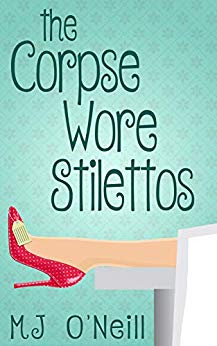 “Since Kat Waters’s father took a trip to the slammer on what she’s sure are trumped-up racketeering charges, life’s been tough. All their assets are frozen, and she’s down to the last few pairs of Jimmy Choos she can swap for rent. To keep her family out of the homeless shelter, the former socialite took a job at the local morgue—a job she’s about to lose when the body of a murder victim goes missing on her watch.

While Kat’s processing the latest victim in the prostitute serial killings, ex-Special Forces soldier Burns McPhee strolls in with an air of confidence, expecting access to the Jane Doe. While Burns tries to flirt his way into examining the latest victim, whom he thinks is connected to the death of his best friend, someone else steals the body right out from under them.

Dodging questions from the cops and kidnapping attempts from a body-snatching psycho, Kat and Burns forge a deal. He’ll clear her name and keep her safe if she gets him information on her peculiar coworkers, one of whom he’s certain is involved with the body heist. But digging up secrets can lead to a lower life expectancy. The unlikely team will need all their talents not to end up as the morgue’s next clients while they hunt for a murderer, the missing corpse, and a pair of diamond-studded stilettos.”

MJ O'Neill: “As the owner of a boutique chocolate factory in Atlanta, MJ O'Neill loves to write lighthearted, romantic mysteries with a sweet twist. She has a degree in business communications from North Carolina State University. When she's not spinning a sweet yarn or creating delicious confections, she spends time with her husband, their kids, a hyperactive cocker spaniel named Devo (after the band), a princess tabby cat named Twilight (before the book stole her name) and a collection of stray fish. The whole gang can be found tooling around the back roads of the South in their RV where MJ uses the downtime to hatch her next sweet plot.”

Katherine Waters is a socialite who had a lucrative career and a fiancé in Boston until her father was sent to prison for racketeering. Her fiancé dumps her and she leaves her job to move back to St. Louis to help her mom and grandmother since all of their finances have been frozen. They also had to leave their elegant family home. Grandma’s friend Claude, helps them find a small house they can rent, he also helps Kat find employment at a hospital morgue utilizing her minor in biology.

Things go amok for Kat when a body is stolen from the morgue one evening while covering for a fellow employee. The cast is full of oddball characters that range to fellow employees, doctors, hospital security, and the Russian mob. Kat takes it upon herself to try to recover the stolen body, or at least find out what happened to her since the detectives don’t seem to appreciate the details of the crime she gives them. The over-the-top storyline is humorous as it twists into areas I would have never expected. While the story arc of the corpse is resolved there is a larger arc that concerns Kat’s father’s incarceration. And who exactly is Claude? And will Kat ever give Burns McPhee a chance to become more than a friend? And what does Simon think Kat has that belongs to him? Dun, dum, dunnnnnn…