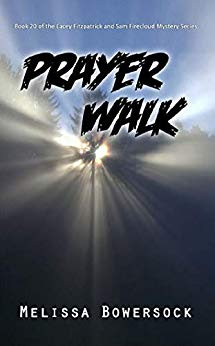 “Based in sprawling Los Angeles, medium Sam Firecloud and his partner, Lacey Fitzpatrick, never seem to run out of hauntings to investigate and resolve, but when they get two separate calls from two frantic customers, they realize they’re getting stretched pretty thin. How are they going to handle two cases at once? Daniel, Sam’s fifteen-year-old son, has a solution, but they quickly discover that solution could lead to serious injury—or worse—for the supernaturally talented boy.”

Prayer Walk caught me off guard delving into religion and the fear people have about the beliefs of others. It’s short, concise, and handled respectfully. It’s incredulous to see similarities in belief systems that so many others do not recognize. Ms. Bowersock and Sam Firecloud turn this presentation of religions on its head.

Lacey Fitzpatrick and Daniel encounter an angry ghost at a car dealership. The owner is frantic, all of his employees are being physically attacked and are refusing to go back to work. The ghost is an employee that was murdered there late one night. The killer is a mystery, it seems as if it was a random attack. Daniel is way out of his league as the ghost possesses him, for a short time, to try to communicate with him. Sam Firecloud is keeping a close, but worried eye on him as Daniel continues to work the case. Lacey delves into the lives of the people related to or involved with the ghost to figure out who this stranger is and why he chose to kill that night. Ms. Bowersock knows how to weave a tangled web. This part of the story has far reaching consequences. Lacey still carries a lot of clout with the LAPD.

If you enjoy cozy mysteries with a dash of paranormal you need to read this series. They are novella length. The author doesn’t mince words with fillers. You get a story packed with intrigue, emotion, characters with integrity who continue to grow, and a powerful sense of wonder. What more could you ask for?

Prayer Walk is book 20 in Melissa Bowersock’s, A LACEY FITZPATRICK and SAM FIRECLOUD MYSTERY SERIES. This series does not need to be read in order. However, you may miss some character development, and why would a conscientious reader want to do that?