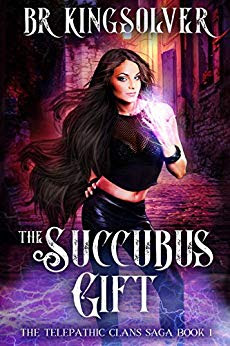 Brenna Morgan’s journey is more complicated than most, orphaned at the young age of eight she has learned to hide her gift of telepathy. After a chance meeting with another telepath she finds a few extended family members and learns her life will never be the same. In a world with a hidden telepathic subculture, Brenna learns the history of the Clan and how to control her powers. This is a fresh take on the succubus myth in a non-magical world.

BR Kingsolver lives in Baltimore with a very significant other, two cats, two Basset Hounds and loves to travel. She has a bachelor’s degree in entomology, a master’s degree in management and has worked at various odd jobs. This is her debut novel. Learn more about BR Kingsolver at her website.

This is a complex and organized urban fantasy where the subculture of the Clan is based in telepathy rather than demonology or magic, although the law of physics are bent. The Succubus Gift adds a unique and exciting twist to the old myths. Ms. Kingsolver has built an elaborate system of Gifts that are basically a combination of Talents that can be thought of as both distinct and interacting abilities. No one telepath has ever been recorded, in their history, having all twenty-five Gifts until the Clan finds Brenna. The first half of the story deals with her inner conflicts upon learning what she is and how she fits into this new world. Being a highly-educated and moral young woman her life is turned upside down. This is a coming of age story for a reluctant succubus whose strength is incalculable because of her many Gifts and Talents.

There are many characters and all are well drawn, their conversations were both witty and honest. One of my favorites was Rebecca, an oversexed protector (but not a succubus), who became fast friends with Brenna. I loved the way they related and interacted with each other. Then there was Collin, the playboy, who Brenna was instantly drawn to but refuses to have a relationship with. (What? I know, right? She’s a succubus for heavens sake!) This adds an interesting twist though that enhances their conversations and adds a bit of humor I thoroughly enjoyed.

The story is set in a realistic, complex world, just like our own, which helped suspend my disbelief. The plot turns dark when succubae all over the world start disappearing and turning up dead. When Grandfather’s succubus is kidnapped the Clan gets involved. The action takes off as a sting is employed and put into operation. Brenna happens to have the perfect Talent, her mother taught her at a young age, to assist in the sting. However to become the bait she must unleash her inner succubus which will change her life yet again forever. This is an exciting new series to take a chance on; Brenna’s journey is unlike anything I have read before.