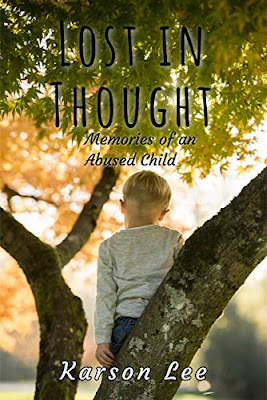 “What would you do if you knew a child who was being abused? If that child was a member of your family? Would you call the authorities and have the child taken away or would you turn a blind eye?

These are the kind of questions that Lost In Thought provokes. The author, who lived through the atrocities mentioned in this book, paints a vivid, if disturbing, image of child abuse and how it affects the psyche as one grows older. What begins as abuse leads quickly to suicidal thoughts and loss of control.

Lost In Thought is the unbelievable true story of a child who was in this predicament. His mother, who was hooked on prescription pills, sexually abused him for years and convinced him that nothing was out of the ordinary. Family members knew of the horrifying situation, yet did nothing to stop it. He distanced himself from his family as he grew older only to become more of an outcast.

This is the powerful true story of a man who was diagnosed with Asperger's Syndrome on the Autism Spectrum in his mid-twenties, overcame adversity, and took back control of his life before it was too late.”

“Karson Lee was born in North Carolina. He is the survivor of child abuse and has since worked with abused children. He advocates to end child abuse. He currently lives with his wife, foster child, and three fur babies. They are currently in the process of fostering/adopting their first child.”
Karson can be found on his Facebook page.

I decided to give this a read because I’ve been monitoring some sexual assault scandals that have unfolded recently, mainly involved with religious institutions, and thought this might give me a valuable perspective from the eyes of the abused. It did that. But it also got me thinking about divorced families and the games parents all too often pull, using the kids as pawns in their power plays. It had me pondering relationships within families and drove home how lucky I am to have the close relationship with my siblings that I do.

Those who might be triggered by any number of things that could go on within a dysfunctional family might want to steer clear of this book. For others looking for a different perspective, this can provide it.

The author says at one point in the book that “My mind jumps from one thing to another, seemingly unrelated thing, then back to another. I struggle to follow a constant, steady train of thought. I feel like I have written this memoir the exact same way. I start one idea, go off on a tangent, and end on something completely unrelated.” That’s true, to a degree, but in some ways it felt like it put me in his mind even more when that happened.

In the end, there are also some positive things in the author’s story and some lessons about what the human spirit can endure and adapt to in order to get yourself to a better place. In that regard, the story was inspiring.

A small amount of adult language and minor sexual content.

The number of proofing issues I spotted went right up to the point where I would consider knocking a star or two off the rating, but didn’t quite go over. The errors were generally minor, either a missing word in a sentence, the wrong word (in instead of on, vise instead of vice for a couple examples) or minor grammar issues.