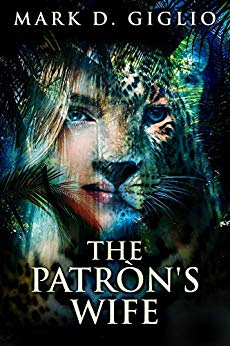 “After a failed love affair, Emilio Aguilar journeys to El Paradiso: a vast plantation in the Ecuadorian highlands.

Hoping to retreat from civilization and temptation, he settles in and promises never to get involved with a married woman again.

But soon, he meets Alma - the beautiful, unhappy wife of El Patròn - and is drawn to a magical world of spirits and ancient power.

Can Alma conquer her spirit animal - the jaguar - and save her soul, or will they all be swallowed by jealousy and madness? And in the end, can Emilio stay true to himself?”

“Mark Giglio is a writer, artist and award winning furniture maker living in San Diego County, California. His education in creative writing and lifelong interest in history bring him to writing the Alchemist Gift book series.

From a long line of artists and craftsmen, he has the vocation of Furniture Maker and is the creator of the Alchemist Series of Art Furniture available on his website.”

Emilio Aguilar (or is it Aguila?) is suffering from a bad breakup with a married woman. He takes a job in the Ecuadorian jungle to design a plan for solar panels for Senior Hector Alvarez, the owner of a coffee plantation called El Paradiso. When Emilio meets Alma Alvarez he is immediately captivated by her beauty and her love of poetry. Alma has a touching story on how she came to stay at El Paradiso. As the years passed she became fascinated with the spirit of a Jaguar. Now, she is being consumed by the spirit and can’t break loose alone.

So, here we are with a story of a weak female who needs rescuing. Emilio is hardly the hero she needs. As the plot thickens and becomes more desperate the plot twists. Bad decisions lead to unforeseen consequences. I became bored quickly with several stupid decisions on all their parts.

The prose describing the landscape of the different areas of the plateau was well written and it made it easy to step into the scenery. I also enjoyed the mysticism of the local stories. Bottom line is that this book wasn’t for me, that doesn’t mean it is a bad story.