Reprise Review: A Lighter Shade of Gray by Devon Pearse 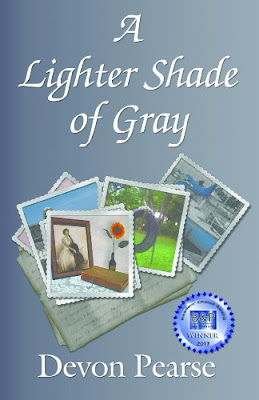 “What does it feel like to stare into the face of madness? Or to anticipate your own? Would you drive away your only love? Could you pretend it didn't matter? How far would you go to protect a friend, or to avenge a death?”

“Devon Pearse was born and raised in beautiful St. Augustine, Florida. As a child, she was surrounded by classic literary works and grew to love and cherish them as dear old friends. It was only natural that she would dream of one day being an author and joining the ranks of the creators of these other worlds, unforgettable characters and thought provoking prose.”

Characterized in the official descriptions as “semi-autobiographical,” I’ll leave it to you to decide which parts are true and which aren’t (your guess is as good as mine). I’ll often find that books I or someone else describes as “literary fiction,” like this one, show deftness with language (which this does), but have a story that isn’t that entertaining or that I care about. I’ll take a good mystery, thriller, or other genre fiction that uses plain language to tell a compelling story over much literary fiction. A Lighter Shade of Gray (which I believe beat those other gray books into publication and shouldn’t be confused with them) has beautiful language and a story I could care about.

Devon Pearse (yes, the protagonist and author’s names are the same) has a mother whose mental illnesses eventually lead her to a rural group home and leave Devon afraid for the future. Are the causes genetic? Devon is fearful that she’s seeing a glimpse of her future and is unwilling to commit to her boyfriend, or even allow him to commit to her. In fact, Devon goes through much of life making decisions influenced by what might happen. There is some mystery and potential romance to liven up the story as well. It was a story that drew me in slowly, but once it got a hold of me, it wouldn’t let go.

Added for Reprise Review:  A Lighter Shade of Gray by Devon Pearse was the WINNER in the Literary Fiction category for B&P 2013 Readers' Choice Awards. Original review ran August 22, 2012,

The Kindle version I received for review had some issues with hyphens in words where they obviously didn’t belong. These appeared to be an artifact from formatting for a paper version.