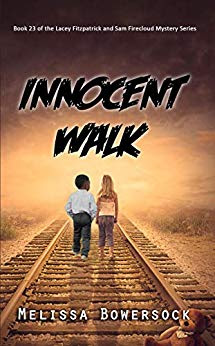 “Lacey Fitzpatrick and Sam Firecloud know that Kenzie, Sam’s eleven-year-old daughter, has inherited his mediumistic abilities. The duo has tried to shelter Kenzie from the emotional and physical violence that often accompany their cases, but when a school bus crashes directly in front of Lacey and Kenzie, the girl is plunged into the heart of the tragedy. Some children survive, but many don’t. Kenzie wants to help both the living and the dead, but some selfish and self-centered adults threaten the process. Can Kenzie free the young, trapped souls, or are the children doomed to purgatory?”

On the way home Lacey and Kenzie witness a tragic bus wreck. Lacey and Kenzie do what little they can to help until EMT’s arrive to take over. There were several injuries and deaths. Lacey patched physical wounds and, Kenzie offered comfort and reassurance as she walked the souls of the dead children into the light. Unfortunately, there are two children who refused to go into the light. One boy, Shawn, who is tied on the earthly plane, and one girl, Cheyanne, who is terrified to go into the light.

Lacey and Sam have to speak to these devastated parents to try to discover why their child didn’t cross over. Both of their stories are different and realistic. Innocent Walk was a hard book for me to read. Anything that involves hurt children lies heavy on my soul, even though it is fiction. If the events happened in the past, I can effectively separate from the story through the passage of time, as in Ms. Bowersock’s first book in this series, Ghost Walk.

Both of these children’s stories are gut wrenching, but Shawn’s little brother Darius ripped my heart right out of my chest. Then there is Cheyanne Holt’s story. It’s not often you see Sam get so emotionally upset that he can’t keep his anger inside. However, I think what he had to say to Minister and Ms. Holt, Cheyanne’s parents, gave them pause and a few things to think about.

To top it all off there is the matter of the con-man who started a Go-Fund-Me type of account to help the affected families of the bus crash and then skips town with several thousand dollars. If you didn’t catch that Kenzie plays a large part in this book, she does an impressive job of holding her own. As a result her mother, Christine, isn’t far behind her. Supporting and watching out for her daughter while beaming with pride at the young woman she is turning out to be.

Highly charged emotions intensify this story. Innocent Walk is thoughtfully written, and well-paced. Even though the subject matter is hard to read it is well worth your while to take a deep breath and dive in. You won’t be disappointed.

Innocent Walk is book 23 in Ms. Bowersock’s, A LACEY FITZPATRICK and SAM FIRECLOUD MYSTERY SERIES. This series does not need to be read in order. However, you may miss some character development by reading out of order.