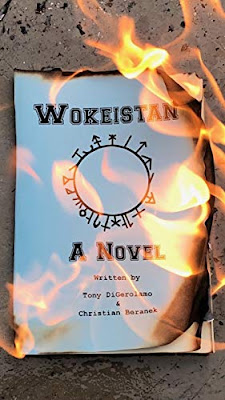 “President Trump has just been inaugurated for the second time. The students at Upstate College are not happy. Led by one charismatic person of color, of African, Indigenous, Pan Asian descent who is a differently-abled Muslim-Atheist, they obliterate the college experience forever.

Wokeistan is a satire: Politics, media, corporations, feminism and the relationships between men and women. In a world where anyone to the right of Fidel Castro is considered a fascist, one college professor will try to save his school.”

“Tony DiGerolamo is a New Jersey screenwriter, novelist, comic book writer, game designer and comedian. He is best known for his work on The Simpsons and Bart Simpson comic books. He has also been a joke writer for Politically Incorrect with Bill Maher, a scriptwriter for Space Ghost: Coast to Coast and a blogger for Comedy Central's Indecision website.”

The premise of Wokeistan is simple. A subset of students at a college push back against social norms. Just like books in the dystopian genre, they take a political direction too far, down the slippery slope until things hit rock bottom. A place where, as the book’s description says, “anyone to the right of Fidel Castro is considered a facist.”

When I finished, I was left not knowing what to think. Part of me loved the book. Part of me felt something more akin to hate, definitely an emotion way to the other extreme of the spectrum. I wasn’t sure what point the authors hoped I’d take away was, if there was one. I didn’t know if I agreed with them or if they got it all wrong. Then I realized, if I didn’t know what they wanted me to think, that was actually a good thing.

I finally took a deep breath. Forced myself to chill. The only difference between this and the dystopian books that I can’t get enough of is that this story is happening too close to home, timewise. Maybe that’s why dystopian books work, giving us some distance from the story being presented. If Orwell’s 1984 had been published in 1982 instead of 1949, it might have caused readers to over react like I did.

So now I’ll remind myself of a few things. The first is that assuming a slippery slope works to make a point in a book, but assuming it is going to happen is a logical fallacy. The point being made, that some directions and changes that have happened and continue to happen in society can be positive, but taken to an extreme can be as bad as what the change is attempting to cure. In fact, that’s essentially what happened here. As with most conflicts, the right answer is usually closer to the middle than either extreme. Maybe I learned something from this book after all.