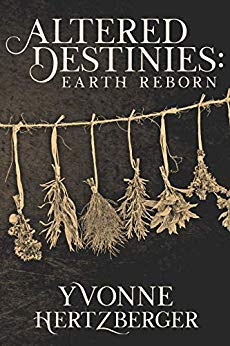 “Civilization re-emerges after near annihilation.

Bain, bastard son of Lord Makin and a healer mother, is plucked from obscurity and named heir to his father's fief. He has no ambition to rule, but is determined not to shame his father or let their people down; nor is he prepared to forsake his mother and the simple values he learned from his humble upbringing.

Phaera, headstrong only child of Lord Danza, has no interest in court life, preferring her vocation as a healer. Her father has promised he will never demand she wed.

When ambitious and cruel young lord Mathune invades a neighboring fief, his actions cause war between the fiefdoms - and turn the lives of both Bain and Phaera upside down. Mathune swears he will have Phaera, whatever the cost.
Bain swears he will not.”

A native of the Netherlands who immigrated to Canada as a child, Yvonne Hertzberger has previously written a fantasy trilogy as well as contributing to a couple anthologies. She is a regular contributor to the indie author superblog, Indies Unlimited.

I’ve rated this book as low as I have due to one reason and only one reason. It is because the number of issues I spotted that should have been cleaned up during the proofreading of the book and weren’t exceeded my threshold of what I see as acceptable by more than double. Most of the errors are minor. If you don’t mind being thrown out of the story every few pages as you trip over a missing or almost-but-not-quite-right word, or maybe you just don’t notice those issues, then the story here is well worth your time.

Polish up those irritants though, and the result would be a book very much unlike my normal read, but one I would absolutely love. The story world is comparable in some ways to what you’d find in a dystopian novel, in that it is in the future and the world that I assumed was earth, had come close to annihilation. However, it really doesn’t have much in the way of what would be called science fiction (and dystopian is a branch of sci-fi) with the exception of being in the future. The civilization that survived and reorganized itself has evolved into something that feels like a combination of the middle ages, the world of a fantasy novel, but with a touch of modern knowledge surviving as well.

Without getting too deep into details, the story itself is thought provoking as well as exciting. It kept me enthralled from start to finish, pulling for things to work out for the main characters, fearful that they wouldn’t, and wondering how or if I was going to get my wish.

Way too many proofing errors although most are minor, the number of them was way beyond my threshold for what is acceptable.