Review: By A Thread: Book 1 of The Trueborn Heirs Series by Nyna Queen 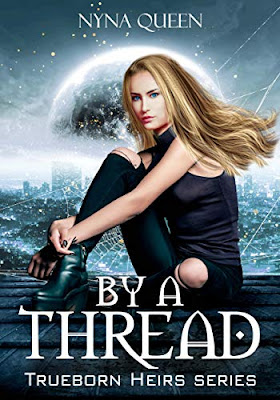 “’I’m a spider, sugar. My shaper kind doesn’t bear that name for nothing.’

That's not something Alexis Harper dares to say very often. If she did, it might just get her killed. Not that she is an easy mark, but even fools get lucky once in a while.

In a world where the magically gifted trueborn rule and the magicless halfborn slog away in the slums, half-blood mongrels like Alex are outcasts—feared and shunned. For most of her life, she has lurked in the shadows, trying to keep her true nature a secret. But the secrecy ends abruptly when she saves two trueborn aristo children from a group of hired killers.

Accused of a crime she didn't commit, Alex suddenly finds herself running from powerful enemies, with no one around to trust. Or what about the mysterious stranger who has been following her? He is one of Death’s Servants, born and bred to kill at the country’s command. Not the most preferable ally, but then, her choices are limited. Soon she has to decide whether she can trust him or not—it’s a gamble she might not survive either way. And before Alex knows what is happening, her life is hanging by a silken thread…”

“Nyna started reading fantasy books at the sweet age of six (in fact, as soon as she could read) and never got out of it. After she finished her law degree, she finally decided to commit herself to a career as an author. When she isn't reading a book or dreaming up another story, she works as a lawyer, indulges in way too much coffee and enjoys long walks in the sun. If you are looking for Nyna, you'll likely find her behind her laptop, hitting the keys, writing down her latest novel ideas - careful, if you speak to her now, she might not remember later!

Right at this moment, Nyna is probably working on the second book in her Trueborn Heirs Series: Web of Lies.”

In Alexis Harper’s magical world she is known as a shaper, her other shape is a spider. This spider gives Alex superhuman strength, speed, and enhanced senses, but very little other magical abilities. Alex and her kind are the lowest caste, below humans. Shapers are feared, and considered savages.

Alex tends bar in the slums to eke out a merger living. When two kids magically appear in the middle of the bar along with the goons they are running from who made it into the portal before it closed, Alex jumps in to protect the kids and kills all the goons. Now, they are on the run. Alex’s plan is to find a way to get the kids back home. There are miles to cross without being seen and magical wards to get around. Word around the republic is that Alex has kidnapped the kids. Josy and Max are the daughter and son of a highly ranked politician, and an important election is coming up. Can you smell a conspiracy?

Ms. Queen spends a lot of time describing her unique world, and its political structure. Her characters are well developed and stay true to themselves. It takes time for the kids to learn to trust Alex, their lives literally depend on her. When their Uncle Darken, who is a forfeit—a state assassin, catches up with Alex he tries to kill her to protect his niece and nephew. The kids save her convincing Darken she has saved them. So, now there are two adults who don’t trust each other trying to work together. The banter between them is entertaining. Alex has no problem confronting and arguing with Darken. Nobody has ever treated him the way she does, and he slowly learns to give her a certain amount of respect. Then he throws her in the river with no warning.

By A Thread is an entertaining story and a decent plot. However, I have some issues with it as a whole. There are way too many proofing issues that include missing, extra, and wrong words. This story is worth the extra attention, and while an editor goes through the story perhaps they could remove all the extra words that don’t move the story forward. But the biggest headache I have with By A Thread is the huge cliffhanger ending!

By A Thread is book 1 of Nyna Queen’s, The Trueborn Heirs Series. There are a few F-bombs and other adult language.

I already sent you an email. Thank you very much for reading my provided review copy of By a Thread.
I saw that you put up a review on Amazon.com and on your blog. I am glad that you liked the plot and I totally understand your critique points. I would like to point out, however, that I sent you that review copy in March 2019 prior to publishing the novel. Since then I took quite a bit of money in my hands and paid a professional editor (an American native speaker) to revise the novel. This does not change anything about the cliffhanger, obviously, but I am quite confident that the majority of the format and typo issues you mentioned in your review (espeically wrong and missing words) are gone. Attached to my email, you find the revised version as it is currently being sold on Amazon and has been sold for the last couple of months. I would have sent it earlier, had I known that you are actually reviewing the book. That said, I would be extremely grateful if you could have a look at the revised version and check if your criticism still applies in that regard. If not, I would kindly ask you to consider adjusting your review and rating accordingly, as I understand that this is one of your major critique points and Amazon ratings are, especially for indie authors, the main means of getting readers to consider your book.

As for the cliffhanger - book two (Web of Lies) will be published in a few months. If you are interested in receiving a free review copy, please let me know.

Thank you very much for your consideration!
All the best,
Nyna