Review: No End of Bad Guys by Jeff Buick 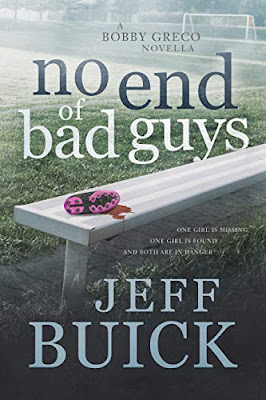 “Something’s off about Molly’s mom. Something sinister behind Alyssa Vaughn’s thin smile and cold eyes.

Orlando homicide cop Bobby Greco has a sixth sense for bad guys, and Vaughn is raising all kinds of red flags. Which is not good because Bobby’s daughter is on the same soccer team as Molly. This one is hitting too close to home.

He already has a tough case on his desk – trying to figure out who abducted and likely murdered a teenage barista on her way home from work. Bobby has a suspect, but without a body and with no hard evidence to build a solid case, he’s hit a dead end. Bobby sets the barista’s disappearance on the edge of his desk and digs into Vaughn. What he uncovers is a dangerous psychopath who has already committed one horrific crime, and Bobby is sure another one is just around the corner.

Now he’s working two cases, where one girl is lost, another is found, and both are in danger.”

This novella is being presented as a “prequel” to the Bobby Greco Series. As I’m writing this book 1 of the series (One is Evil) is also out. My conclusion after finishing this novella is that the author might be thinking that a small investment, sure a bit less in money, but mainly in time, to read this will give him a chance to convince potential readers to keep reading the series. If that’s his thinking, he hooked me. (If it’s not his thinking, maybe it ought to be.)

I found the two cases that our protagonist, Bobby Greco, is working on in this novella compelling. I wanted to know what he found and cared that he solved the cases. That one of them was a situation where Greco didn’t know there was a crime, but was seeing cause for concern and decided to start digging, was a twist that you don’t see often and felt like a risk, which kept the level of intensity even higher than it might have been. I’m definitely recommending this one if you’re into intense, fast moving suspense. Just be forewarned, he’s trying to suck you into the rest of the series. But if this prequel is any indication, I don’t think you’ll mind.

Thanks, Al, I appreciate you taking the time to read and review No End of Bad Guys. And yes, I’m not so subtly trying to get readers interested in the Bobby Greco series.

Thanks for dropping in and commenting, Jeff.