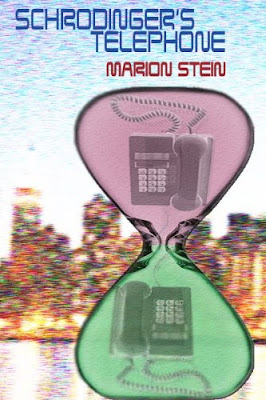 “Lizzie Greene seems to have it all -- a great husband, a job she loves, a baby on the way, even a rent-stabilized two bedroom apartment on New York's Upper West Side. Then a random decision leads to a senseless act of violence, and it all disappears.

But what if things had been different? What if things are different? Could someone be both dead and not dead at the same time? Is it insanity to believe in mysteries that go beyond human understanding, in the evidence of things not seen?

Lizzie's sister, her best friend, and many others think she's lost her senses, but maybe she's gotten a glimpse of something most of us never get to see.

Schrodinger's Telephone is more for fans of The Twilight Zone than of Twilight.”

A native New Yorker, Marion Stein has two Masters Degrees, one in creative writing and the other in social work. She moved around the US and Mexico before returning to New York in September 2001. In addition to this novella, she has a novel, Loisaida, and another novella, The Death Trip, available.

Speculative fiction is an umbrella that encompasses many subgenres: Science Fiction, Fantasy, dystopian, Horror, and Supernatural Fiction are just some. However, some speculative fiction doesn’t neatly fit into any of the subgenres, and Schrodinger’s Telephone is one of those. A case could be made that it is Supernatural Fiction, but that presupposes one specific interpretation of what happens to the protagonist, Lizzie, when there is at least one other possibility, that Lizzie is insane.

Regardless of what we call it or how we categorize it, Schrodinger’s Telephone is a quick and engrossing read that will exercise your mind. How would you react if someone you knew insisted that something impossible had happened?
What if that someone was you?