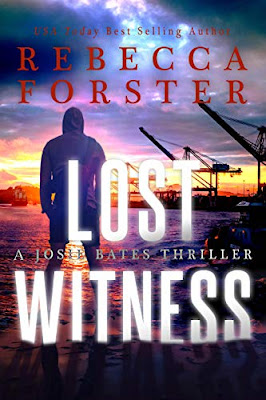 “It's two in the morning and an aging cargo ship lies off the Port of Los Angeles. Deep in the bowels of the vessel, an important man is dead and the woman who killed him is mortally wounded. On shore another man staggers out of the sea determined to save the woman before she dies or the ship sails. Exhausted and terrified, he goes to the only person he trusts to help, Josie Bates. He brings with him a history she can't ignore, a problem that seems insurmountable, and a plea she can't refuse. But Josie is up against international law, maritime justice, a Port Authority that doesn't want anything to get in the way of profit, the U.S. Coast Guard who dances to the tune of politics and a captain who swears the people in question were never on his ship. With the clock ticking, Josie becomes ever more desperate to prove the woman is real and get her safely ashore. What Josie doesn't know is that the sands of time that are running out may be her own.”

Fans of Rebecca Forster’s Witness series who feel like they’ve been left hanging for more than five years should be primed to jump all over this book. For those unfamiliar with the series, this can be read as a stand alone as the author includes enough back story to understand the most important parts of the past as they pertain to this latest installment.

In Dark Witness, the last installment of the Witness series, we left two of the main characters, Hannah Sheridan and Billy Zuni, in a strange place. Billy thought Hannah was dead while Hannah knew (or at least had convinced herself she knew) that Billy was alive, in spite of evidence that he wasn’t, but she would have had no idea how to find him if she was right. He could be almost anywhere in the world.

Several years later we pick up their stories again. Here they’ll discover the other again, have their current worlds shaken up in the process, and have a current crisis to survive before they’ll have a chance to figure out where to go from there. This story has a lot of action, is full of unpredictability, and has a lot happen over a period of only three days. As with the rest of the series, it’s also a great read that kept me engaged and the pages turning.

One minor use of adult language.

This is the eighth book in a series. Although there is a lot of history between the main characters that will improve the understanding and enjoyment in subtle ways for those who have read past books, this book can still be read as a stand alone.

Read an advance reader copy prior to final proofreading and can’t judge the final product in this area.