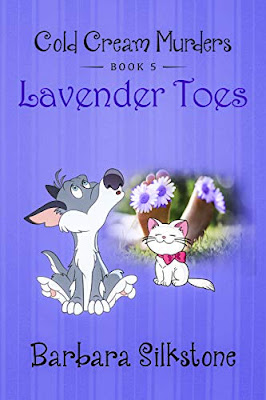 “Someone dear to Olive is found dead—toes up and barefooted—in Digby’s Bees lavender field. Olive and Lizzy team up with WonderDog to find the killer. Digby’s hives are home to the wondrous Soprano bees. The little buzzers are the source of the secret ingredient that powers their Nonna’s Cold Cream—a fountain of youth in a jar.

Finding the killer becomes more of a challenge as the gals protect Digby’s bees from a determined land developer who wants the beekeeper’s farm. The clock ticks as saving the honeybees becomes every bit as important as finding the murderer.

While Olive and Lizzy buzz about, Grams, nonagenarian ace reporter for the Silverfish Gazette, takes on the story of a diamond heist in nearby Sarasota. Can the gals protect Grams from another near catastrophe or can the feisty lady handle it alone?

Help the Cold Cream gals solve the mystery of the Lavender Toes while once again bailing Grams out of trouble. And what about those bees?”

Lavender Toes is one twisty-turny mystery, and the action starts before we get properly introduced to Olive’s recently-found cousin, Cozette Peroni, with her fancy designer heels. New characters are introduced and Grams is off to do some investigative reporting of a jewel heist in Sarasota for the Silverfish Gazette.

The mystery around the dead body in Digby’s field of lavender has everyone scratching their heads. Digby is also fighting a real estate developer who wants his land. The ass is playing dirty by spraying insecticide over Digby’s property by planes to kill his bees. Without his Soprano bees’ special honey to make Nonna’s Miracle Cold Cream, it also threatens Olive and Lizzy’s business.

The local police handling the murder investigation seem sketchy, and WonderDog doesn’t like them. Olive seeks Kal’s help, but his district doesn’t extend that far. All he can do is offer Olive advice and try to get the local sheriff in that area involved. Of course, Olive does some things that could land her in hot water. Then she and Lizzy go after the land developer. Like I said, the plot is twisty, turny, and entertaining.

Ms. Silkstone is able to weave all these story arcs into a satisfying ending and Grams gets the scoop on a big story for the Starfish Gazette. Don’t miss this one.

Lavender Toes is book 5 in Ms. Silkstone’s, COLD CREAM MURDERS Series. Each book comes with a recipe for a homemade beauty product and can be read as a stand alone.