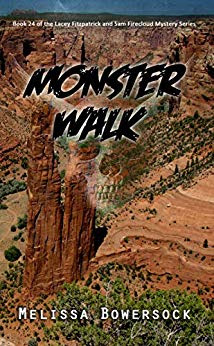 “Two recent murders have rocked the small town of Chinle, Arizona, on the Navajo Reservation. Navajo Tribal Police have found no connection between the victims even though both were killed the same way and brutally mutilated. Lieutenant John Stoneburner has no choice but to call in medium Sam Firecloud and his partner, Lacey Fitzpatrick, to see if they can make sense of the grisly facts. When it becomes clear to Sam that the murders are related to ancient Navajo mythology, he enlists the help of an elder, his grandfather Ben, who leads them all into the perilous realm of gods and monsters.”

We first met Lieutenant John Stoneburner of the Navajo Tribal Police in book 11, Spirit Walk. Lieutenant Stoneburner wasn’t raised with the old ways and is therefore not a believer in Navajo mysticism or aware of their legends and myths. While Lt. Stoneburner is investigating two recent gruesome ritualistic looking murders that seem unrelated, he enlists Sam Firecloud to get his opinion on the mysterious connection between these two murders. After walking the site of the murders, Sam’s memories of a Navajo myth are stirred and he decides he needs to consult with his grandfather Ben.

After seeking advice from Ben, Ben’s own curiosity is piqued, He decides to tag along on this case, uninvited. Of course he is welcomed with open arms. (I was thrilled to get to spend more time with Ben.) So, off Sam, Lacey, and Ben head to Canyon de Chelly. The Canyon is a geologic and cultural wonder that sports Spider Rock, a sandstone spire that thrusts up 750 feet from the canyon floor unconnected to any other monolith.

The plan is to camp up on the rim to watch to see if their suspicions are correct. They suspect that the killers are invoking the gods from the legend of Monster Slayer. Learning Navajo myths drew me into the story and the way Sam was able to merge the past with modern myths was genius. Ha! Here I am giving Sam the credit when the credit actually goes to the prolific imagination of Ms. Bowersock. She also weaves in a little of the Firecloud family history which is especially heartwarming.

Monster Walk may be my new favorite story in this series. The undercurrent of this tale swept me away.

Monster Walk is book 24 in Ms. Bowersock’s, A LACEY FITZPATRICK and SAM FIRECLOUD MYSTERY SERIES. This series does not need to be read in order. However, you may miss some character development.

Thank you, Ms. Bowersock for stopping in and commenting.