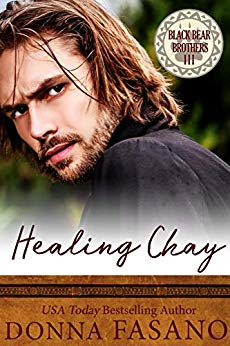 “All Chay Makwa wants is solitude so he can conquer these tormenting nightmares, yet he can’t ignore the soft sobs of a woman in the woods near his cabin. The stranger with hair as pale as moonlight and secrets in her eyes is in need of a shoulder to cry on. But after a kiss meant to soothe turns passionate, she is gone.

Tori Landing has heard of Chay, but they’d never met before the night by the lake when the grief over her sister’s senseless death overwhelmed her. Tori steers clear of relationships for a very good reason and feels putting the security of others before her own happiness will amend her past failings. But the appeal of the brooding Native American is stronger than her determination to remain single and unencumbered.

Is Tori the one woman who can bring Chay peace… and can he teach her to trust in love?”

Chay Makwa is a tortured soul. He believes he cannot find peace until he can understand and come to terms with his nightmares. Finding Tori Landing at the edge of the lake crying late one night, tugs at his heart.
Tory owns a Bed and Breakfast on the outskirts of town by the lake. Her B&B is also a secret harbor for abused women. Tory is part of a network that relocates them far away from their abuser. There are only a few people in town who know this about Tory and her Bed and Breakfast. She has to be careful because she also entertains guests at her establishment.

Through her work with abused women, Tory has become quite intuitive. This trait has become natural for her and it serves her well in dealing with abused women. In this story we learn why she is so dedicated to her work. After Chay meets Tory he begins to see a new future of himself, if it wasn’t for those blasted nightmares. Tory tries to become a sounding board for his dreams and offers perspectives for him to consider. However, she has to hide her true work from him and Chay feels rejected because she has to keep her secret while she has an occupant in the house.

I found Tory and Chay’s journey extraordinarily insightful. There are some hard truths that needed unraveling. Ms. Fasano is able to weave these two souls together in such a way that the holes now have a way to close nicely into a cohesive whole. I do have to add that I had been looking forward to Chay’s story since we met him briefly in the first book. It was worth the wait. I also feel like Chay offered the best apology. ~ swoon ~

Healing Chay is book 3 in Donna Fasano’s, The Black Bear Brothers Series.
The books in this series are stand-alone novels, but reading the books in order will offer the most enjoyment.

Oh, wow! I am overwhelmed! Thank you so much for the fantastic review!