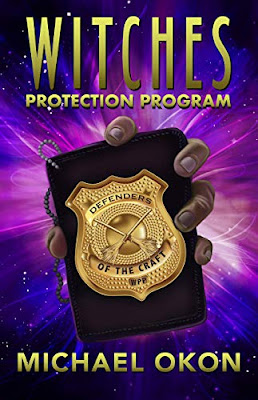 “Wes Rockville, a disgraced law-enforcement agent, gets one last chance to prove himself and save his career when he’s reassigned to a 232-year-old secret government organization. The Witches Protection Program. His first assignment: uncover a billion-dollar cosmetics company’s diabolical plan to use witchcraft for global domination, while protecting its heiress Morgan Pendragon from her aunt’s evil deeds. Reluctantly paired with veteran witch protector, Alastair Verne, Wes must learn to believe in witches…and believe in himself.”

“Michael Okon is an award-winning and best-selling author of multiple genres including paranormal, thriller, horror, action/adventure and self-help. He graduated from Long Island University with a degree in English, and then later received his MBA in business and finance. Coming from a family of writers, he has storytelling in his DNA. Michael has been writing from as far back as he can remember, his inspiration being his love for films and their impact on his life. From the time he saw The Goonies, he was hooked on the idea of entertaining people through unforgettable characters.

Michael is a lifelong movie buff, a music playlist aficionado, and a sucker for self-help books. He lives on the North Shore of Long Island with his wife and children.”

In this contemporary urban fantasy a disgraced law-enforcement agent, Wes Rockville, is reassigned to a secret government organization. His first assignment is to protect the young heiress of a billion-dollar cosmetic company, Morgan Pendragon, and uncover their diabolical plan for world domination using witchcraft.

Wes’s learning curve is steep, as he doesn’t believe in witches. The plot and the characters are cleverly written. Morgan Pendragon is a feisty witch who marches to her own tune and doesn’t rely heavily on her witchcraft unless she’s in a pinch. She’s a fun character, however, she doesn’t trust Wes.

The battle scenes are epic and full of fast action that Mr. Okon captures without a hitch. And there are many. Slowly Morgan begins to trust Wes and she starts working with him. It’s easy to see a relationship developing. The ending is satisfying and some family truths are revealed that I didn’t see coming. All in all, an entertaining story.