Review: Accidental Activist: Justice for the Groveland Four by Josh and Barbara Venkataraman 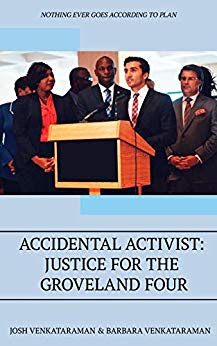 “This book will take you through my incredible four year quest for justice for The Groveland Four and teach you how to pursue your own causes, whatever they may be. It is a primer for positive action, a journey through Florida's past as well as its future. Some of the things you will learn: everything takes more time than you think, nothing ever goes according to plan, help can come from unexpected places, time is on your side, everyone is connected to everyone else, you can reach your tipping point for success and not even realize it, your goals can change along the way, and flexibility is key. Let's get started, shall we?

***Proceeds from the sale of this book will be used to establish "The Charles Greenlee Memorial Scholarship" to benefit a child with an incarcerated parent.”

Josh Venkataraman is a graduate of the University of Florida. This is his first book.

Barbara Venkataraman is Josh’s mother. She’s an attorney and mediator specializing in family law as well as an indie author with several books in multiple genres available.

This book has multiple things working for it, any one of which makes it a worthwhile read in my opinion. I’ll talk about three here.

The first is basic story of the Groveland Four. If you aren’t familiar with them, these were four young black men (one only 16) accused of raping a young woman in 1949. The most important part is that two were convicted of a crime (the other two didn’t survive until trial time) and years later it became apparent that they hadn’t committed the crime. The Pulitzer Prize winning book Devil in the Grove by Gilbert King discusses the case in much more detail for those who are interested in more detail of the accusations and trials.

The second part is the memoir aspects of the book. Specifically, the thinking and feelings that Josh went through as he attempted to get more attention on this case with the goal of a pardon for those wrongfully convicted of this crime. Josh’s thoughts on how this, that happened almost seventy years ago, and current events compare to each other is especially pertinent. Maybe we haven't come as far as we’d like to think.

The third aspect is as a guide or inspiration for those who have a cause of their own to fight for. Josh’s story might give you ideas and inspiration. It will also make the point that whatever you plan is going to change, that you can’t predict where help might come from, and the most important thing is to keep trying. (I’ll bet there is a lesson here that would be applicable in other areas too.)

I especially liked how the authors included thoughts from some of the other participants and stakeholders at various points to give us a look at what was going on from multiple points of view. This was a quick read and if any of the above is appealing, well worth the time.