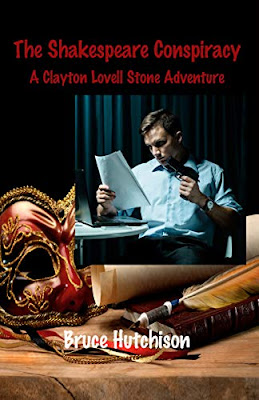 Clayton Lovell’s partner goes on a sudden research trip to the UK and is murdered there. She leaves him a clue as to why she has been killed. She has stumbled upon something that has the potential to rewrite Elizabethan history. There are those who desire very much to benefit from what she has found. And others who believe the world is better served by the status quo. Lovell follows her to London, Oxford and Stratford upon Avon.

Bruce Hutchison has several novels and a non-fiction book on the market all of which investigate his thesis regarding Shakespeare. There is also information on his website.

The wraparound which Hutchison has used to enable him to develop his thesis regarding Shakespeare provides an exciting aura of conspiracy and violence through which the historical facts and extrapolations are woven. If you are not familiar with the several theories regarding the true authorship of Shakespeare’s plays, and such conundrums appeal to you, then this is an intriguing and informative read, especially towards the end.

Each of the 73 chapters in Hutchison’s book is preceded by an epigraph in the form of a short quote from Shakespeare’s oeuvre. The function of an epigraph is to act as a summary, introduction or example from some famous literary work so as to draw a comparison, or to generate a specific context for what follows. Often these are too anodyne to do that. A number of the epigraphs are misquoted.

There are some howlers. ‘Lord Cecil Burghley’ is actually William Cecil, Lord Burghley. A burial 392 years ago would have been made in 1626. Not a useful date for any Shakespearean enquiry I can think of. The ‘Charwell’ river which flows through Oxford is actually the Cherwell. There are others.

Hutchison is, perhaps, unfortunate that I picked up this book. I am a British writer and historian with a keen interest in Shakespeare and Elizabethan England. That being the case, of course I would pick this off BigAl’s virtual shelf for review.

Like Hutchison, I don’t believe for a moment that the glover William Shakespeare of Stratford upon Avon wrote the plays ascribed to him. Over many years a number of notables have felt the same way, including Americans Mark Twain, Henry James and Charlie Chaplin. On this side of the Pond a current advocate for alternative authorship is Mark Rylance, erstwhile director of The Globe Theatre in London and one of our finest contemporary actors. Could Hutchison’s theory possibly be correct? There is, unfortunately, a fair-sized elephant in the room that he doesn’t address. And so, the debate continues.

A number of typos. Also some muddiness of expression, non sequiturs, confusing continuity, and unhelpful formatting, particularly of the epigraph quotations at the head of each chapter. This complex book would be easier for the reader if an editor had been through it.