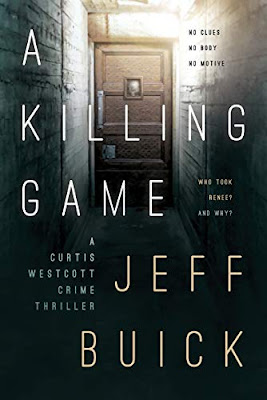 “Born into a wealthy and powerful Boston family, Renee Charlebois has it all. Except for one small detail – she’s been abducted without a trace. Who took her, and why, is a mystery.

The case gets dropped on Curtis Westcott’s desk, but Boston’s Chief of Homicide has little to work with. No clues, no body, no motive. Renee had no enemies, no financial skeletons in the closet, and no bitter ex- boyfriends. Curtis and Aislinn Byrne, his go-to detective on tough cases, work the file hard but come up empty. Then Westcott attends a party and overhears a story that catches his attention – he and Aislinn have their first break.

They dig in and unravel a complex series of crimes tied to Renee’s disappearance. As they peel back the layers they are convinced Renee is still alive, but that her abductor is on a precise schedule and has every intention of killing her. It’s a bizarre and twisted game, and time is quickly running out.”

Wow. As the description says, the culprit in this case is playing a bizarre and twisted game. There have been multiple murders before our culprit lands in Boston. Once Curtis Wescott starts to catch on to what’s happening, he finds he’s in a race against time to see if he can solve a puzzle before it’s too late. If he doesn’t a person, currently just missing and, if the clues can be believed, still alive, will become another in a string of corpses.

The backstory as to why this is happening comes out as Wescott closes in on an arrest. Will he make it on time? All I can say is that I wasn’t sure how it would end until I got to the end, but it was an intense thrill ride the entire way. This has all the elements I look for in a thriller with plenty of unique twists, unlike anything I’ve seen before. Loved it.

This is the first book in a new series of thrillers featuring Curtis Wescott.
Some adult language.