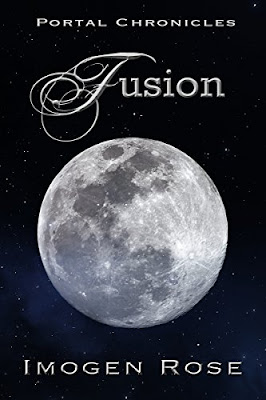 “This is the final book of the Portal Chronicles series. That, apparently, brings a conclusion to the time-and-dimension-hopping adventures of the two Arizonas, Arizona Stevens and her alter ego in another dimension, Arizona Darley.”

“Globetrotter Imogen Rose is Swedish by birth, went to college in London (where she received a PhD in immunology), and is now a Jersey girl. After her eight-year-old daughter insisted she write down her stories, Rose wrote the first of her Portal Chronicles series and decided to let it out into the world. The response was so positive that she’s continued with the series, and started two other series.”

Since I became an avid reader at age 10, I have been a binge reader, and lover of series. Every free minute, weekends, and vacation time was devoted to reading as many books as I could fit in. This continued through my 38 years of teaching and first year and a half of retirement.  During the summer of 2010, I discovered the Portal Chronicles by Imogen Rose. I ripped through the first two books, and fell in love with the story and characters. I’ve always been intrigued with time travel stories, but had not read much YA or paranormal fiction.  I eagerly awaited the next two books in the series and ripped through those as well. Finally, in March of 2013, the last in this adored series was released while I was on vacation, and I had the same plan to read quickly to the end. That did not happen.

I read the prologue to Fusion and found myself stopping to think back on all of the characters…what they had gone through, how they had grown and changed, and what was going to happen to them in this final book. These characters had been living vividly in my brain for so long; they seemed real to me. I wanted to know the outcome, but was reluctant to reach the end and let them go. So, I stopped reading until I got home. Then, I read the first chapter and put it down again…contented to wait for more. I continued reading this way, until I finally finished the book two months later. I felt the way Lauren, Ms. Rose’s daughter, must have felt when she was waiting for the next installment of the story to be written for her. This is not to say that I won’t be prone to binge reading anymore, but I am glad to discover that reading can be just as satisfying done slowly over time.

I was disappointed that I did not finish the book in time to review it for the blog tour stop at Books & Pals; Al and ?wazithinkin’s reviews were an awesome double shot! It was a fitting and satisfying ending to this series, leaving the door open to some characters crossing over into one of Ms. Rose’s other series. I fell in love with Rupert, so I am hoping he is one to show up again. When I found out that there was going to be a supermoon June 23rd, it reminded me of the beautiful cover for Fusion, and prompted me to ask about a third review for the book to be posted. So, here it is; a review for a super series on the date of the supermoon. Thank you Ms Rose for leading me to a new way of reading, introducing me to such well developed, intriguing characters, exposing me to exciting paranormal events, and leaving me with the wish that I could find them all again.

Each of the books in this series relies on information from the previous book, so to experience the full enjoyment of the characters and understand the plot details, I recommend reading the books in order.

There is a small amount of adult language included.