Review: Keeper of the Winds by Russell Davis 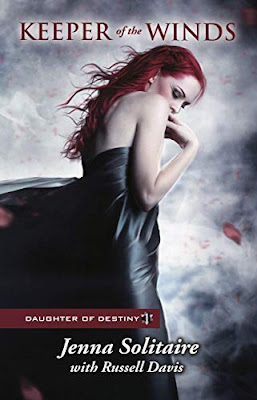 “My name is Jenna Solitaire and everything I thought I knew about myself, my family, and my future is wrong. My life is not my own. It never has been. I just didn't know it―until now…

Nineteen-year-old Jenna Solitaire has lost her grandfather, who was her only remaining family. Going through old family belongings in the attic, she discovers a trunk, and in it a planchette made of bone and an ancient wooden board scorched by fire and covered in strange symbols. Thinking only to connect with some element of her past, Jenna attempts to use it, and soon there is a voice whispering long-lost secrets in her mind. Secrets about her family, and the role handed down through generations of Solitaire women: Keeper of the Board. Thrust into a world she doesn’t understand, Jenna will begin an adventure that will ultimately take her around the world, but first, she must master the Board itself, even as she faces forces of greed and power – those who will stop at nothing to take the Board for themselves. As the Board conjures devastating storms, Jenna struggles to find her footing and determine who she can trust. Events spiral out of control, and Jenna fights to protect those she still believes in: Father Andrew, the family priest who has known her since she was born, her best friend, Tom, and his girlfriend, Kristen. And then there is Simon Monk, shrouded in mystery and connected somehow to Father Andrew and the Vatican itself, who appears to have her best interests in mind, but frightens Jenna with his intensity. Jenna must conquer her doubts, her fears, and take on the mantle of Keeper of the Board and the Daughter of Destiny, or leave the Earth itself in peril.

Russell Davis uses the pseudonym pen name of Jenna Solitaire for this novel.

From Mr. Davis’ website: “Mercenary writer... novel and anthology editor... publishing industry jack of all trades, master of some... husband, father, and occasional player of poker. Best-selling author and editor Russell Davis has written and sold numerous novels and short stories in virtually every genre of fiction, under at least a half-dozen pseudonyms.”

Jenna Solitaire has just lost her grandfather who raised her. She lost her parents as a young child and then her grandmother a few months after that. Jenna is a first year college student with very few friends she lets in her life. Her best friend from childhood, Tom, has firmly been relegated to the friend zone.

As Jenna is going through her grandparent’s attic she finds an intriguing box in the bottom of her grandmother’s trunk. Jenna can tell it is very old and has runes carved in the wood. Now it seems to be calling her, and she can’t stop thinking about it. She is having strange dreams infesting her sleep. Then someone breaks into the house and she notices men following her. This is all stressful and she has a right to have a short fuse. But, honestly she needs to cut back on the coffee, eat something, and reassess the situation. Her incessant whining is nerve-wracking and for a smart girl she sure shrugs her shoulders a lot. It almost seems like a tic.

Now, on to better things. Tom and Kristen are adorable as a couple. Tom is all reason and logic, Kristen is anything but. I loved her character and I think any reader will agree with me. Jenna thinks she’s an airhead. Simon, one of the men following Jenna, is a good guy and doesn’t deserve the way Jenna treats him. There is a lot more to learn about him though. Simon has spent years researching this ancient magical artifact and is trying to teach Jenna about the box and her new destiny as its new Guardian. As the weather around her town grows dark and rainy with the winds growing in intensity, Jenna refuses to acknowledge her moody emotions have anything to do with it.

Jenna is a selfish character and hard to like. It’s not often I run across a character that I consider TSTL. But she does live or there wouldn’t be a story. In between Jenna's pity party and stupid decisions there is a lot of action. Because of course there is a malevolent man, who seems to have unlimited resources with minions to do his bidding. He wants both the box and Jenna for his own evil purposes. On a more positive note there is an epic battle that comes to a satisfying climax as Jenna seems to find her moral compass during the devastating storms that almost kill her friends, of which there are four…

After all is said and done this novel was a bag of mixed nuts for me. If you like urban fantasy with a twist of occult you may really enjoy this novel and adore the characters.

TSTL = Too Stupid To Live.

The version of the book I read was a pre-release ARC, so I can’t judge the final version in this regard.