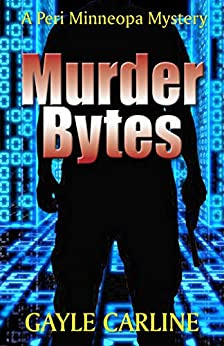 “In this fifth and final installment of the Peri Minneopa Mysteries, Peri has had enough. She’s closing her business, marrying her detective boyfriend, and settling down to a life of ease–until her brother shows up, accused of a murder he swears he didn’t commit. Now she’s back in the thick of things, investigating the death of an engineer who may have been stealing techno-secrets from other companies. Her relationship with her brother is an icy one, at best, and she struggles with her ambivalence, as well as her desire to leave investigative work behind. Digging around in people’s lives is reasonably easy, but when the bullets start flying, will Peri be able to keep her promise?”

A native of Illinois, Gayle Carline moved to Southern California years ago. She’s written in magazines about her favorite hobby, horse racing, as well as a humor columnist for her local newspaper. After years of doing that she added novelist to her list, writing the first of her Peri Minneopa mystery series.

This was my first time reading a book in this series so I can’t compare it to prior books, but I liked the character of Peri a lot. She’s more real than a lot of fictional detectives. She has plenty of doubts, both personal and professional, but they aren’t so bad as to prevent her from doing a good job of detecting. This story has a bit of a tech thriller kind of story line that’s intertwined with the main mystery, the murder of an engineer. Add to that a complication and additional story line due to Peri’s long-absent brother being in the middle of this mess. I want to call him her estranged brother, which might be a fair description, or maybe not. The strange part of “estranged” definitely fits their relationship though, which only complicates things more. Throw in Peri’s close relationships with law enforcement, including her fiancé, other police officers and her friend, the coroner, and she’s able to get information a typical PI wouldn’t be able to. All in all, a fun, intense read with a lot of unique aspects I don’t typically see in a detective story.

While the fifth book of a series, I haven’t read the prior books and felt that this story stood alone.