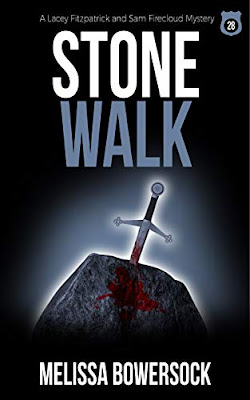 “Who knew there was a Scottish castle hiding on a high promontory over Monterey, California? Lacey Fitzpatrick and medium Sam Firecloud certainly didn’t; not until they were called in to investigate ghostly manifestations. The Gold Rush-era castle is being restored as a museum, but the most important plans have been derailed due to the refusal of frightened workers to trespass onto the outraged spirit’s territory. When Sam and Lacey attempt to unravel the truth behind the angry ghost, they are plunged into a grisly, hidden culture of unspeakable rituals.”

Sam Firecloud gets a desperate call from Ava Saucedo, the director and overseer of the restoration project, for the Iain MacElwain Museum in Monterey, California. Iain MacElwain, a Scottish immigrant, made his fortune during the Gold Rush. He built a modest Scottish castle to remind him of his homeland on the cliffs in Monterey overlooking the Pacific Ocean.

The last project is to turn the cellar into a wine-tasting room, to help maintain a revenue to defer the cost of running the castle museum. The problem is there is a ferociously angry spirit in the cellar and everyone who enters is frightened out of their wits. So, now the hunt begins to identify this raging spirit.

Luckily, Ava has organized and cross-referenced files from Iain MacElwain’s own meticulous record keeping. Ranging from personal ledgers, diaries, and the construction of his castle along with names and dates. Lacey, Sam, and Ava all pitch in combing through the files.

The Scottish history is fascinating and unnerving at times. They had a brutal, and fierce culture. The ending is ghastly and will add another chapter to the museum’s annals. It’s giving me the shivers thinking about it. Stone Walk is another great addition to this series.