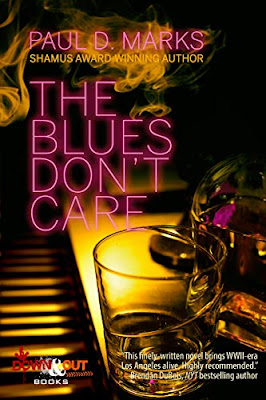 A huge McGuffin inhabits this story, which is why I have used the Amazon ‘blurb’ supplied by the publisher so as not to uncover it accidentally.

The Amazon blurb says “Bobby Saxon lives in a world that isn’t quite ready for him. He’s the only white musician in an otherwise all-black swing band at the famous Club Alabam in Los Angeles during World War II—and that isn’t the only unique thing about him...

And if that isn’t enough to deal with, in order to get a permanent gig with the band, Bobby must first solve a murder that one of the band members is falsely accused of in that racially prejudiced society.”

Bobby Saxon has previously appeared in three of Paul's published stories – ‘Sleepy Lagoon Nocturne’, from the anthology Landmarked for Murder, ‘The Good Old Days’, in the anthology Murder Across the Map, and ‘Santa Claus Blues’, from Futures Magazine.

Paul D. Marks is a Los Angeles native, and loves the city that LA used to be. His former day job was as a screenplay "script doctor." He is one of the last people to have shot a film on the famous MGM backlot before it was torn down.

He is the author of over thirty published short stories, which, he says, run the gamut from serious fiction to mystery and satire. They include several award winners. This is his second novel. A complete list of his publications is on his website.

So, what’s the best thing about this novel? The author is a native of LA and it shows. He is very knowledgeable about its history, its architecture, its people. The city is a vibrant character in its own right. The time in which the book is set is evocative. The bands, the huge boom in business, the early days of the consumer society, the cars, the segregation, Hollywood and the stars who worked there, the gangsters, the music – it’s all here. Many famous names are dropped: many famous watering holes of the time make an appearance. There is much about the war and what the conscripts may be facing overseas. Period detail is very good indeed.

Unfortunately, the plot of the book is a crime and investigation of same (by Saxon) which are too slight to carry its 400 or so pages. Because of this The Blues Don’t Care is rather a baggy book, proceeding at a leisurely pace to a series of similar denouements.

You are most likely to enjoy this book if you prefer character-driven fiction. Saxon is a complex character and he is the heart of the book: everything else is there to give him something to do.

I was working from an e-ARC, so presume the typos etc which I came across will be corrected before the book is released.