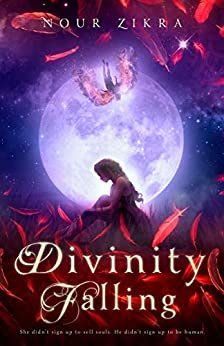 “Fierce twenty-two-year-old Addy hasn’t had the easiest of circumstances. Then she runs into Adriel, a half-naked, young man with major back burns, kickstarting a series of disasters in her life, mainly her younger brother Reed disappearing into thin air with a strange man. She immediately suspects Adriel is the culprit. After all, Reed’s kidnapper had the exact same burn marks on his back.

Adriel, who a few hours ago had been a guardian angel, doesn’t know why he is on Earth with a human heart pulsating in his chest. After he sinned, he was sure he would be cast into Hell. Instead, the wild, young woman he stopped for help on the road won’t stop questioning him about her missing brother.
Although Adriel claims innocence, Addy doesn’t believe him until she comes face to face with Lucifer, the lord of Hell, who has imprisoned Reed. Lucifer awakens the demonic blood dormant within Addy and sends her on a mission to corrupt human souls. His desire: to wage war on Heaven with an army of demon-turned humans.

And not following his plan? That’s a sure way to get Reed killed. Against Adriel’s objections, Addy must follow through with a job she never signed up for—preying on human souls.”

Addy feels like she has the weight of the world on her shoulders. Raised by an apathetic mother, Addy took on the responsibility of raising her younger brother, Reed, at a young age. Reed is in his first year of college and she still feels responsible for protecting him. Addy is about to have her world turned upside-down and is given some hard lessons between good, evil, and the nuances of the gray areas in between.

Addy has a fierce spirit to her own detriment at times, but she doesn’t give up. The plot is a rollercoaster ride through heaven, hell, and everyplace in between. Adriel is ever present at Addy’s side, in his own quest for answers.

Divinity Falling is also an emotional journey that takes a unique look at self discovery and freewill with an epic battle at the end. If you enjoy stories about angels and demons, with a twist of psychological thriller, you will enjoy this book.

Adult language with more than a few F-bombs.