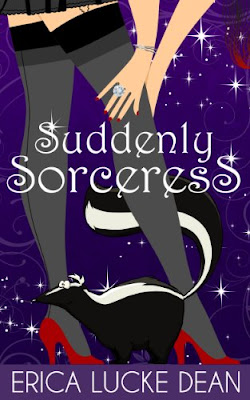 "PMS can be a real witch.

“After walking away from her career as a business banker to pursue writing full-time, Erica Lucke Dean moved from the hustle and bustle of the big city to a small tourist town in the North Georgia Mountains, where she lives  in a 90-year-old haunted farmhouse with her workaholic husband, her 180 lb lap dog, and at least one ghost.

To learn more about Ms. Dean check out her website.

I’ve read books that combine something paranormal with another genre - romance, thriller, and horror immediately come to mind - but I don’t think I’ve ever read one that tossed chick-lit and paranormal together before. Both the story conflict and much of the humor in Suddenly Sorceress come about due to Ivie, the protagonist, finding that she can cast spells, although she’s not sure exactly how she’s doing it or how to undo what she’s done.
While I felt sorry for Ivie and wondered if she was going to find a way to turn her ex-fiancé back into a human, I was also laughing at her the entire time. Some of that was because of the situations she found herself in (getting attacked by a horny goat) and some was the author’s sense of humor or way of describing something. One example is the pop culture reference when Ivie as the narrator said she, “felt the wintry air soak into me and shook like Bruce Banner in the throes of a temper tantrum.” Another was prompted by her hair which changed color over time (although she wasn’t dyeing it) starting out with red highlights and eventually turning bright red, which prompted this:
I look like Ronald McDonald’s slutty younger sister. “Would you like a happy ending with that value meal?”