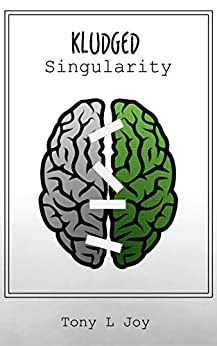 “Alan is wasting his time in technical support, dreaming of the future. Accidentally releasing an advanced computer worm wasn’t how he imagined it would start. Now he’s just trying to hold everything together with digital duct tape and wishful thinking.

His employer’s sinister secrets throw a wrench in those plans as he learns the technological singularity is imminent. When ‘working to live’ takes on a literal meaning Alan realizes the future may not be as bright as he’d hoped.
Alan fights to guide the future of humanity before control, and freedom, slip from his fingers forever.”

The primary reason I didn’t rate this book one or possibly even two stars more is that it is lacking in polish. The proofreader needed to take another pass or two through it as there were numerous minor errors that kept throwing me out of the story when I’d have to re-read a sentence after mentally tripping over the place where a small word was missing or a minor typo jumped out at me.

That said, if you’re not sensitive to those kind of issues (or you’re willing to overlook them) there is an interesting story here. It invokes some interesting questions about whether technology can be taken too far, morality and ethics in a changing world, and even what it takes to make something human. A good technothriller will have you excited about what technology can possibly do some day (and for my tastes it shouldn’t be too far out there, so seemingly plausible), but also provide a counterpoint, cautioning us to be careful. The story in Kludged Singularity hits that balance well.

Way too many issues that should have been caught in copyediting and proofreading. None serious, but the sheer number was way more than is reasonable.

Thank you so much for taking the time to read and review Kludged Singularity! I'm glad you enjoyed the story despite the challenges from poor proofreading.

I did want to note that the current published edition is much cleaner, the review copy and initial publication was definitely plagued with typos. Thanks to the reviewers and initial readers bringing the issues to my attention I was able to get another proofreader to go through it and produce cleaner copy for future readers.

Glad to hear that, Tony.

I'm allergic to under-proofread books. But am sampling on your promise that the glitches have been fixed, Tony :-)

I hope that my book delivers a mistake-free reading experience now, but if you do find anything please let me know so I can fix it and switch my proofreader for future books.