Review: It Was a Dark and Stormy Night by Chester Oliver 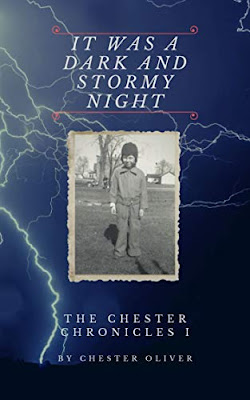 “From the moment he was born, Chester Oliver found life to be a puzzle. Worse, it was a puzzle to which, it seems, he hadn’t been given all the pieces. Even his name was a source of bafflement. For years, he thought his name was Butch. Then, when he reached school age, he learned the truth. What the hell! In those days, the name Chester conjured up images of Matt Dillon’s limping, drawling sidekick on Gunsmoke. Chester Oliver might as well have handed the bullies a ‘kick me’ sign. And that was just for starters. Like his namesake, Chester Oliver shuffled his way through ticks and snakes, bicycle and car wrecks, girls with clothes on and off—even an ornery horse aiming to throw him. All the while, he was trying to answer the question: ‘How did I get here?’”

Born in Northern Wisconsin, raised in Wisconsin and Texas, Chester Oliver has led a nomadic life, worked a variety of jobs, and is now settled in Montana with his wife Jan where he lives in a “Victorian house on a tree lined street.”

This is billed as part 1 of “The Chester Chronicles,” so presumably there is at least one more volume, maybe several, planned for the future. Odds are you’ve never heard of Chester Oliver until now and may be wondering why you’d want to read about his life in a series of memoirs. That’s a fair question.

I’ve had a theory that most random people, especially those who are “of a certain age” and therefore have a lot of years of experiences to draw on could, assuming appropriate writing skills, write a memoir that many (myself included) would find to be an interesting read. I find myself going from comparing my experiences (yeah, I remember what it was like to move to the new town and be the new kid in the neighborhood) to nostalgia at time. Sometimes an experience I hadn’t had, for example his frequent fishing at a lake cabin with family, I’d imagine as much like those of a friend of mine whose family owned a fishing resort in rural Minnesota. Experiences that aren’t like anything I or anyone I know well have had are a chance to put myself in someone else shoes and hopefully learn a bit about viewing things from a different point of view.

With the exception of one experience and it’s aftermath that didn’t happen until fairly close to the end of the book, Chester’s experiences weren’t a whole lot different from what many of us have experienced in life, yet they’re still his unique combination of experiences and, I found reading about them entertaining and a positive experience. To me, that’s what memoirs are about, and there is often as much, if not more, to be learned from a normal person than from someone famous, infamous, or outside of the norm in some way.