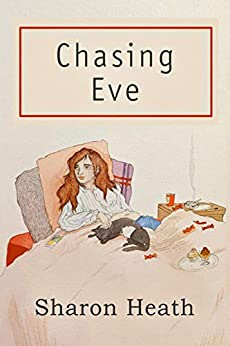 Who knew that miracle would come in the form of an acutely candid best friend and a motley crew of strangers—a homeless drunk once aptly nicknamed “Nosy,” a lonely old woman seeing catastrophe around every corner, a shy teenager fleeing sexual abuse, a handsome young transplant from the Midwest with a passion for acting and for Ariel herself? Not to mention the fossil remains of a flat-faced crone who just might have been the ancestress of everyone alive today?

Chasing Eve takes us on a funny, sad, hair-raising adventure into the underbelly of the City of Angels, where society’s invisible people make a difference to themselves and to others, and where love sometimes actually saves the day.”

Find out more about Ms Heath at her blog.

Trying to decide what it was that appealed to me about this book I came to a strange realization. It wasn’t the story. Well, maybe that isn’t fair. There are a few story threads that together make up this book, a couple related to the protagonist Ariel’s struggles with different aspects of life and another about her quest to sneak in and see the fossilized remains of what she imagines as one of the first people on Earth. A novel has to have a story, and this one does, and I liked that story. But what appealed to me the most were the characters. They ranged from rich to poor, from young to old and on to ancient (literally) in the case of Eve, the fossilized remains already mentioned. In spite of a wide variety of characters I found each of them got me thinking, entertained me, and showed me something in the way they viewed the world that I could learn from or at least better understand others from what they had to show me. A great book needs both a good story and good characters. Chasing Eve delivers on both.

The character development was wonderful - that's exactly what I loved about it, too. :-)

Thanks for dropping by, Melinda. It was sure an interesting and entertaining crew.

Thank you for the lovely review! I fell in love with these characters and how generously they revealed their stories to me.

I am reading it now, during the dark days of the pandemic. It is real enough to ground me and fictional enough to let me escape. But it isn't bleak (which would be unbearable). I am grateful to Sharon Heath for writing the perfect novel for this moment.

Thanks for writing the book and dropping in, Sharon.

And thank you, Unknown commenter. :)

Dear Unknown commenter, you brought tears to my eyes. Thank you, and may you and those you love stay safe and healthy!