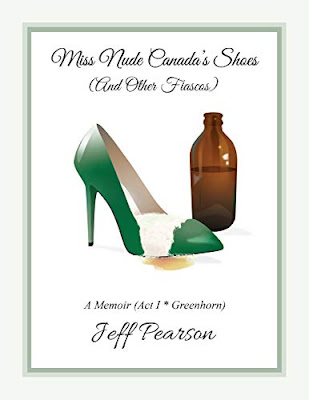 “Sooner or later, everyone comes face to face with a fiasco—even the innocent, angelic types like Miss Nude Canada circa 1986. Generally speaking, fiascos, which thankfully come in many different forms, are events where the caca hits the fan; there’s failure, breakdown or catastrophe of some sort and everything just slithers off of the rails in a sickening, sideways fashion. Human idiocy, in all of its glorious manifestations, is often the fiasco’s prime catalyst with ego-squashing humiliation its necessary outcome. Fiasco-prone humans with an above-average surplus of caca-splattered fan-blades in their closets have many (sordid) tales to tell. Mr Pearson, the floor is all yours ….

Strap yourself in tightly for a compelling and entertaining, emotional and geographical roller coaster ride of epic proportions as Mr. Pearson makes his way rather randomly through the labyrinth of young adulthood and beyond. With cheeky wit and a swashbuckler’s flourish with the language, the devil is alive and thriving in the details as candid confessions of either maximum intoxication levels or a cyclic battle with upper-chamber malfunctions, and the resulting adventures, some immensely comical and others deeply poignant or troubling, leave one reeling with disbelief. Many of the author’s stories are just plain, freaking crazy, setting up the reader wanting for the madness to never end. And the others will leave you stunned and bruised—or rubbing away tears with a finger. So step right up, gather your courage and try on Miss Nude Canada’s Shoes (And Other Fiascos). Yes, they will be soaked in beer—but a prediction: you’ll be so impressed as to how well they fit that you’ll never want to take them off!”

“Jeff Pearson was born in Pembroke, Ontario, Canada in 1963 and attended Carleton and Lakehead Universities where he mostly majored in Maximum Intoxication / Fiasco Production. Then he went vagabond—rambling / exploring / travelling / working—for years … all over Canada and beyond. He kept detailed journals and has been writing down something or other for over thirty years: poetry, short stories, song lyrics, a novel and now a memoir. For the past twenty years he has been manning various fire towers deep in the Canadian wilderness. Miss Nude Canada’s Shoes (And Other Fiascos) – A Memoir, a grand compilation of a whole heap of madness—inside and out—is his inaugural presentation to a world of insatiable readers.”

From his bio you’d get the impression that when the author isn’t hanging out at a fire tower in the wilderness areas of Canada or working to put out one of the fires that have started that he’s getting drunk and/or stoned, narrowly avoiding serious trouble, and raising hell somewhere. Reading this book will do nothing to dissuade that opinion. This book is like a short story collection with one big difference, the stories are true. Call it an episodic memoir. You’ll find out about Mr Pearson getting drunk and raising heck (okay, maybe that other place) in various Canadian cities, small towns in Canada, and even taking his show on the road in the US and Mexico. I think he’d be fun to hang out with while BSing and tossing back a few brews. Reading this book allowed me to do that vicariously while decreasing my chance of arrest. That’s something I don’t think I’ve ever said about a book before.