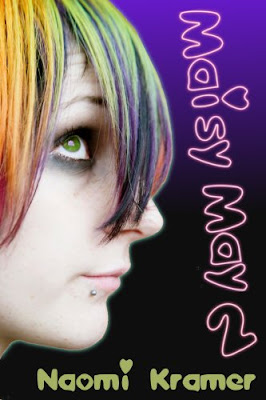 “Naomi is an Australian author living on Macleay Island, in south-east Queensland. She works in IT, and loves to play with the English language in her spare time. She's usually found sporting brightly-coloured hair and wielding a mug of coffee as though it's her last bastion against a comatose state.”

Kramer also has two other series (all novellas), the Dead(ish) series and her Bad F*ck series of short story collections about less than perfect experiences with … um, I’ll let you figure that out yourself.

Be sure to check out Ms. Kramer’s updated book lists on her Amazonauthor page.

I’ve read and liked all of Naomi Kramer’s books, but Maisy May, her first book and the first in this series, stood above all the others as my favorite. In fact, it ranks among my favorite reads of the last several years. After waiting more than three years for the second volume of the planned trilogy, it has finally arrived.

The author is from Australia and uses slang and spelling conventions from her native country.

Added for Reprise Review: Maisy May 2 by Naomi Kramer was a nominee in the Young Adult category for B&P 2014 Readers' Choice Awards. Original review ran August 16, 2013.