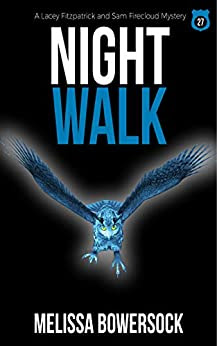 “When medium Sam Firecloud first hears about an Amber Alert on the Navajo reservation, he is stunned to realize the missing girl is his own young cousin. He and his partner, Lacey Fitzpatrick, rush to the scene in an attempt to help find the girl, aided by Sam’s grandfather Ben. When the Fireclouds are dismissed by the FBI agents that are working the case by standard means, Sam takes measures into his own hands, and finds the pathway before him leads into the depths of the supernatural… and death.”

This story begins with Sam reminiscing about how Lacey has influenced his life. He was a hardcore bachelor. He never entertained the idea of ever getting married again. And now, he can’t imagine his life without her. It wasn’t surprising that Night Walk is told through Sam’s point-of-view. His introspection is interrupted by an Amber Alert of an eleven-year-old girl who has been kidnapped from her bed during the night in Kayenta, Arizona. Her name sounds familiar to Sam. Then he gets a phone call from his brother Gabe, wanting to know if Sam had heard the news about Nina Gray Hills. She is indeed who he thought she was, and Nina is about the same age as his daughter, Kenzie.

It’s off to the Navajo Reservation so Sam can walk the girl’s home, in particular her bedroom. It’s a hard walk considering Nina Gray Hills is his cousin. Things get more complicated when the FBI steps in on the case. They want cold hard facts, not hoodoo crap from a medium. I loved it when Sam calls Detective Stoneburner, a Tribal Officer, who has turned into a believer from two previous cases Sam had helped him on. I loved the dialogue between Stoneburner and Sam as they discuss the FBI agent on the case. Then I cheered with delight at the way Sam threw back the same words the FBI agent had dismissed Sam and Ben with earlier.

Oh yes! Ben, Sam’s grandfather, insists on accompanying Sam and Lacey on this mission. Ben has an innate way of knowing he will be needed in more ways than one. This book is full of trails, tribulations, and tests for Sam. The tensions and emotions run high. Now let me tell you Ben has an ace up his sleeve that he will not share with Sam. I would love to be a fly on the wall when Sam has a talk with his grandfather, and I assure you there will be a talk. I can only imagine, because that talk would be in Navajo.

One of the reasons I loved this book is because the whole book is told from Sam’s point-of-view. It was interesting to see behind Sam’s stoic mask he portrays in the other stories. Poor Sam was so torn most of the time, but I loved the way it all came around full circle.