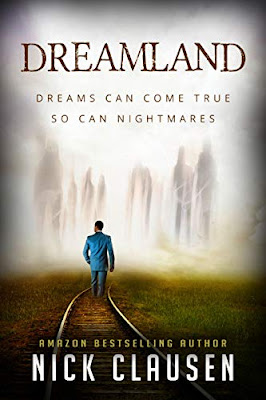 “In his dreams, Louie begins visiting an alternate reality where he meets his father, who died when Louie was still a baby. At first, it seems like a wonderful opportunity for Louie to finally get to know his dad. But things aren’t exactly what they seem, and great horrors loom very close by.

The place Louie enters in his sleep—called Dreamland—is only a small part of the dreamworld. All around it lies The Outskirts. That’s where nightmares come from. And the creatures who live there are constantly on the lookout for new prey. Someone they can lure in and catch. Someone they can keep as their prisoner for all eternity.

Will Louie lose himself forever in dreams? Or will he manage to wake up in time?”

Author:
“Nick Clausen writes chilling horror and apocalyptic tales so that he doesn't need to work a real job. He lives in a tiny country far, far away and he grew up on rye bread porridge and Stephen King books.

Published in four different languages, he has written several popular books, including They Come at Night and Human Flesh, and is right now working on ending the world one day at a time in his zombie series Dead Meat.”

To learn more about Mr. Clausen please visit his website.

Louie is a twelve-year-boy who has started having dreams that take him to a realm of dreams he learns to call Dreamland. The colors are off, but it looks like a small town with a park, a railroad, and stores. However, the only person there is a man in a blue suit and Louie. The blue suit man stays at a distance until he feels like he can approach Louie without scaring him. Blue suit man aims to earn Louie’s trust above all else. Blue suit man shows him around Dreamland. It’s a small contained perfect world which is surrounded by the outskirts. The outskirts are gray and gloomy. It is where monsters and nightmares live. Blue suit man tells Louie he is his father who died when Louie was one year old. Stories his dad tells Louie turn out to be true when he fact checks with his mom. So Louie uses his time in Dreamland to get to know his father. Louie is totally enthralled with his dad, and he feels safe escaping to Dreamland.

Louie’s mom, Ellen, still mourns her husband’s death from cancer eleven years ago. She has a fear of commitment, which manifests in moving every few months, but not out of the town they live in. Louie locates the house they used to live in as a small family. It’s abandoned, run down, and is rumored to be haunted, which Louie dismisses. When Louie starts spending too much time in Dreamland things start to go sideways. Louie is losing control and tension goes into overdrive as the darkness starts to move around and claim Louie.

The rich description of Louie and his mom’s world put you in the story. Dreamland is easily watched from afar, and the darkness is all consuming and unrelenting. So hold on to your wits, and your seat for this wild ride.

Only a few proofing misses, nothing that threw me out of the story.